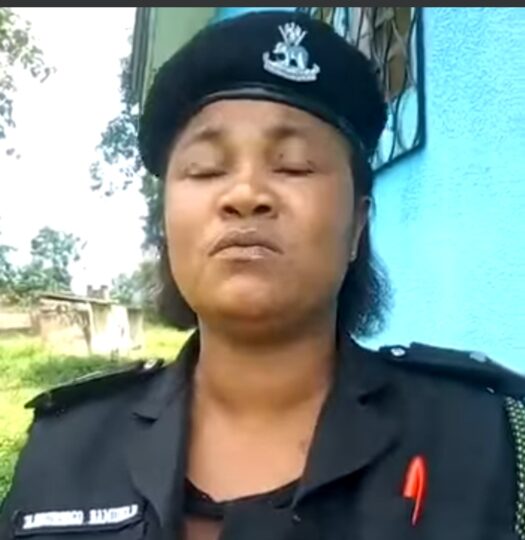 Bamidele had in a viral video which went viral on Wednesday alleged that DCO Matthew battered and attempted to shoot her for refusing his amorous advances.

She said she refused the love advance of Matthew because she is married.

“I don’t know my offence that made him to start beating me, he naked me, he injured me on my chest, hand. All of these because he asked me out, but I told him I am married and I cannot be involved in extra-marital affairs, hence, he started blackmailing me.

“He was telling people around that we were dating and I took offence to it. The act of assaulting me happened in the presence of two constables, ten civilians. After beating me, he went inside, carried a dane gun and attempted to shoot me. But the civilians took me out of the office, they asked me to run away, but I insisted that if he wants to kill me he should go ahead. Ajayi wants to kill me o, pleases assist me o.”

In reaction, Police spokesperson, Muyiwa Adejobi, said the IGP has ordered investigation into the alleged battering of the Inspector by his superior.

He said the Police will take action after the investigation.

He said, “Following the leaking of a video on the social media showing a dehumanized and battered policewoman in Osun State by her immediate boss, the Inspector-General of Police, Mr Usman Baba, has directed the State Police Commissioner, Olaleye Faleye, to launch an investigation into the incident.

“We will await the report of the investigation from Osun State Police Command before necessary actions are taken. However we assure the general public that justice will be done in the case, to protect the core values and ethics of the NPF.”