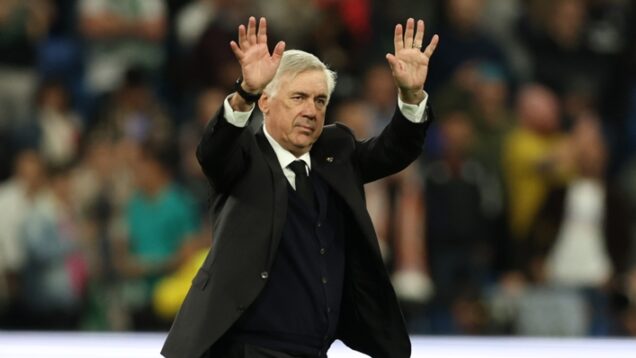 First-half penalties from Luka Modric and Rodrygo, followed by second-half strikes from Marco Asensio, Vinicius Junior, and Federico Valverde saw Madrid ease to a 5-1 win at the Santiago Bernabeu.

The win was Ancelotti’s 102nd in the Champions League, drawing him level with Manchester United great Ferguson for the most victories by a coach in the competition.

When asked about matching the record, Ancelotti quipped: “Let’s go for the 200. Happy to do it here at Madrid!

“It’s been a lot of games on the bench. I think I’ve done pretty well.”

The result also secured top spot in Group F for the Champions League holders, who won their pool for a third successive season.

Madrid had to come through matches against Paris Saint-Germain, Chelsea and Manchester City before beating Liverpool in the final.

On who Madrid might end up facing in the next round, Ancelotti was typically laid back.

“After last year, it’s better not to look at it. Going there [to play the away fixture] first gives you a small advantage, but not too much,” he said.

“The return home last year helped us a lot. The second game at the Bernabeu helps us.”

Jota grabbed a late consolation for Celtic, who saw a first-half penalty saved by Thibaut Courtois. Asked by BT Sport how important the Belgium goalkeeper is for Madrid, Ancelotti said: “A good team is a good goalkeeper, good defenders, good midfielders, and a good striker – and also a good coach!”

“This is the most important thing,” he added with a smirk.

Celtic had their chances aside from the penalty, though found themselves in the unprecedented position of being 2-0 down to two spot-kicks inside the first 21 minutes.

Both penalties were awarded for handball, and the decisions seemed harsh, in particular the second, with Matt O’Riley unable to move away from a shot hit straight at him.

A perplexed Joe Hart told BT Sport: “I don’t think either of them intentionally used their hand, I think that goes without saying.

“I spoke to Matt and he said his hands were inside him, and it hit him – what do they want him to do? Chop his arms off?”