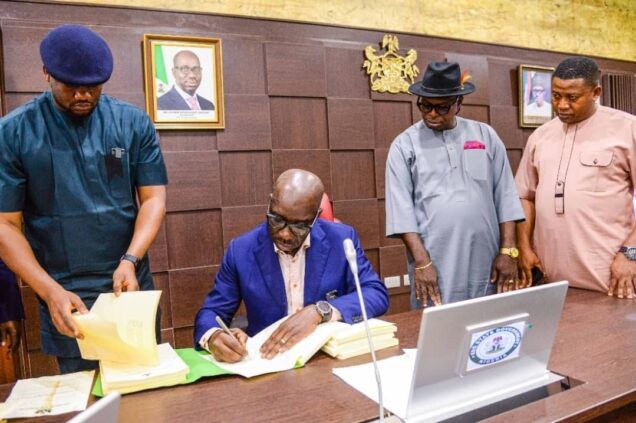 The bills he signed into law include the bill for the establishment of the Edo State Justice Sector Reforms and the Edo State Development and Building Control Agency.

Other bill signed into law by the Governor was a law to establish the Edo State Forestry Commission and provide for preservation, conservation of forest and various matters, which repealed the Forestry Law of 1968.

Signing the bills into law at the Government House, Benin City, Obaseki described the event as a milestone to the state.

“Today is significant for us in Edo State as we have succeeded in a bold move to enact and revise laws in areas that we have not done for a century or half a century.

“The signing today of the Edo Justice Sector Reform Law and the new criminal law for me is a watershed and a milestone.

“Over the years, the lack of adequate coordination among the judicial institutions in Edo and across the country has created a major problem in administration of justice leading to congestion in our prisons, lack of cohesive actions and the likes.

“These reforms will help deal with issues in these sectors as it will improve coordination in the judicial Institution.

“This new law is an essential part of the agenda of our current administration in setting up the required legal architecture for a forward looking judiciary which will also help us in our goal to create an investment-friendly and role based society for generations yet unborn,” the Governor said.

Commenting kn the new criminal code law, Obaseki noted that in the new law, the offence of rape has been strengthened to deal with the issue of rape and its diverse manifestations and other offences, adding: “New offences have been created to close some gaps in the legal framework.”

He noted that the building law will ensure that people stop the indiscriminate erection of buildings without permission from relevant authorities in the state.

According to him, “We have had a strange situation in Edo State. People build without building approval and the new law makes it an offense punishable by law to build without getting the required approval. This will stop our cities from growing into urban jungles. The bill will bring back sanity to our building environment.”