What US security alert has done to Nigerians - FG 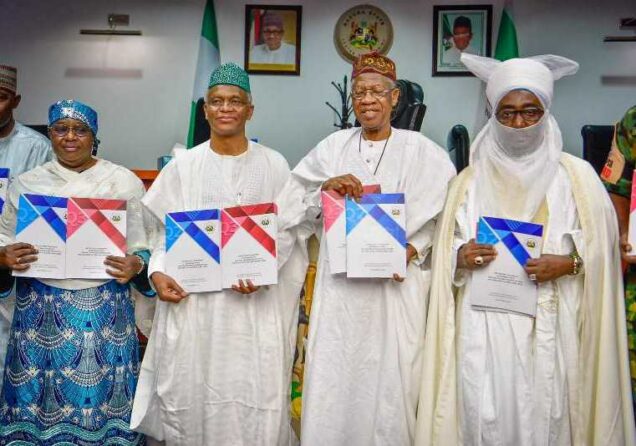 Mohammed with El-Rufai, Lamido Sanusi and Kaduna deputy governor, Hadiza Balarabe at the unveiling of the report.

The Federal Government on Friday said the US security alert to its citizens in Nigeria has only achieved the purpose of terrorising Nigerians and set the nation in a panic mode.

The Minister of Information and Culture, Lai Mohammed spoke on Friday in Kaduna at the presentation of the reports on overview of security situation in the state for the second and third quarters, 2022.

The report had shown there had not been major terrorists attack on Kaduna State since the Abuja-Train attack in March. The report also showed that terrorists activities in Kaduna had reduced drastically.

The minister thanked the state government for the significant achievements made in tackling banditry and terrorism in the state.

“The figures are very clear, and what impressed me most is the synergy between the government, traditional institutions, the military, the stakeholders, and the media.

“I want to thank every stakeholder who have done the needful to ensure that you have a more stable and more productive society.

“I am leaving Kaduna today much more reassured that our security agencies have a very firm handle of the security situation in Nigeria and that the worst is over,” he said

“That brings me to the most topical issue today. Which is the security alert sent by the U.S. as to the security situation in Nigeria, Abuja, in particular.

“I want to say very categorically, without mincing words, that whatever has to be the intention of this security alert or travel advisory what it has done is to terrorise our people and set the nation in a panic mode,” he said.

Mohammed said, although the American government has the right to issue travel advisory to its citizens, but it should not go to the extent of scare mongering.

He said no responsible government would swallow hook line and sinker security report from any other country, especially when it has the confidence of its own security architecture to gather intelligence and act upon it.

The minister also frowned at the criticism in the media that followed the response by the Federal Government that it was in control and on top of the situation.

He, therefore, admonished the media to be circumspect in their reportage of sensitive issues of security.

The News Agency of Nigeria (NAN) reports that the security overview as presented by the state government reveals a significant reduction in attacks by bandits and insurgents due to the intensified military action in frontline areas of the state.

The reports also showed that besides ground operations, many sorties had been flown by the Nigeria Air Force to further degrade the capacity of insurgents and bandits.

According to the report, insurgent groups have not executed a successful attack in the state since the train attack in March 28.

It also recorded significant reduction in killings, violent attacks, kidnapping, rape cases, animal rustling while there was increase in the figure of bandits/terrorists neutralised by the military
There was also increase in figure of arms and ammunition intercepted by the military and arrest of traffickers in illicit drugs.

Also speaking, the state Governor, Malam Nasir El-Rufai said the report was published in fulfillment of their obligation to the residents of the state.

According to him, the citizens have legitimate expectations to be provided with constant consistently accurate accounts of what is going on and to be updated on the measures being taken to address the security challenges.

He said there have been a drastic reduction in insecurity, terrorism, banditry, kidnapping and other violent crimes in the state.

“The figure shows a pattern of reductions in the gravity of security incidents in the second and third quarters of 2022 compared to the first quarter, and indeed year-on-year compared to 2020 and 2021.

“This is a consequence of the intensification of offensive security operations against bandits and terrorists in recent months,” he said.

The governor expressed gratitude to the security agencies for their constant collaboration with our Ministry of Internal Security and home affairs in the hard work of securing our state.