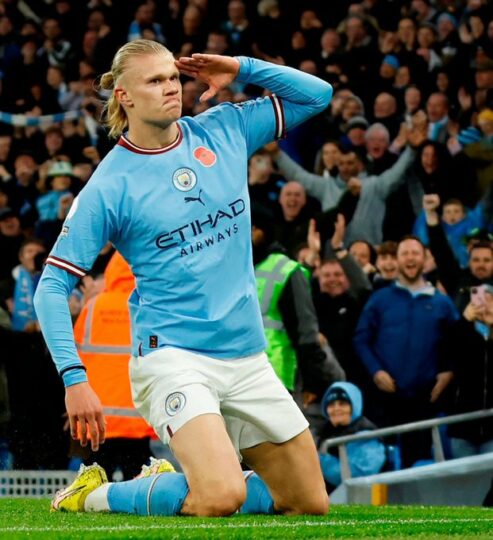 Erling Haaland converted a late penalty as 10-man Manchester City beat Fulham at the Etihad Stadium on Saturday to move top of the table.

City had taken the lead on 16th minutes through Julian Alvarez.

Alvarez had a golden opportunity after receiving a fantastic pass. He kept his cool and lashed the ball in off the crossbar.

Things got bad for City as Joao Cancelo made a reckless challenge on his opponent on 26th minute and was shown a red card without any hesitation from the referee, with a penalty awarded to Fulham.

Andreas Pereira won the battle of wills and sent an unstoppable penalty past Ederson into the bottom left corner to make it 1-1.

The homers had to play with 10 men for the remaining part of the match, but they still dominated possession.

Haaland, who came in as a substitute scored for City on 74th minute after Kevin De Bruyne showcased his great technique and produced a beautiful lofted cross into the box.

Haaland met the cross and got himself onto the scoresheet with a header inside the right post, but after VAR’s review, the goal was cancelled for offside.

The match was heading for a draw when De Bruyne was brought down in the box on added time.

Haaland took the kick and converted to make it 2-1 for the homers. Bernd Leno got a hand on the penalty, but could stop it from flying into the bottom left corner.