Nigerian Army worried over low interest in recruitment from Rivers 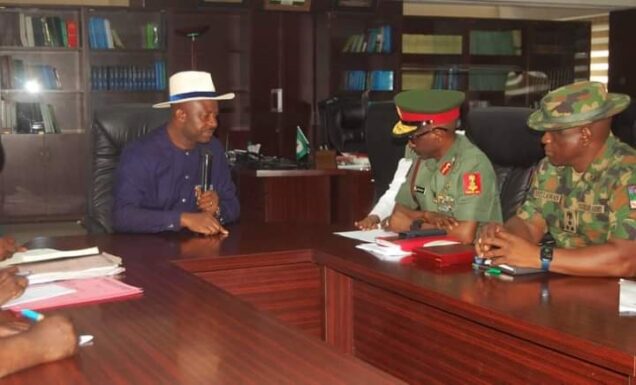 The Director, Manpower Planning at the Army Headquarters Department of Administration, Major General Ibrahim Jallo, expressed the concern when he led a delegation to the Secretary to the State Government, Rivers State, Mr Tammy Danagogo.

The Nigerian Army has expressed concern over the refusal of people of Rivers State origin to join its ranks.

The Director, Manpower Planning at the Army Headquarters Department of Administration, Major General Ibrahim Jallo, expressed the concern when he led a delegation to the Secretary to the State Government, Rivers State, Mr Tammy Danagogo.

Jallo stated that visit to the state government was sequel to the instructions of the Chief of Army Staff (COAS) Lieutenant General Farouk Yahaya.

He said the COAS was concerned that Rivers State was unable to fill its recruitment quota into the Nigerian Army.

The situation, the COAS observed if not immediately addressed, would result in Rivers State being shortchanged in their entitlement for even representation in the Nigerian Army.

Speaking further, Major General jallo disclosed it is the constitutional right of Nigerian citizens to subscribe to the Nigerian Army; adding that recruitment into the Nigerian Army is in compliance with stipulated Federal Character requirement.

He noted that there have been a decline in the number of applications from Rivers State in the last 3 recruitment exercises.

This, he said, necessitated the engagement of the State Government for the sensitization of its indigenes on the correct process to subscribing to fill its allotted quota.

Major General Ibrahim Jallo informed the Secretary to the State Government of the ongoing 84 Regular Recruit Intake which started on the 10 October 2022 and would end on the 2 December 2022.

The application, he added, was free of charge courtesy of the magnanimity of the COAS, Lieutenant General Farouk Yahaya.

He subsequently presented fliers to the the SSG to aid prospective applicants.

In his response, the Secretary to the State Government stated that he was appalled at the revelation that Rivers State has not been subscribing to its allocated quota into the Nigerian Army in accordance with the requirements of Federal Character.

He said the action of the COAS in directing the engagement with the State Government showed the love COAS has for Rivers and its indigenes.

The SSG assured the delegation that effort would not be spared at ensuring that Rivers State indigenes subscribe massively to the ongoing 84 RRI recruitment process.

The SSG appreciated the team for the visit and thanked the Chief of Army Staff for the sensitization.