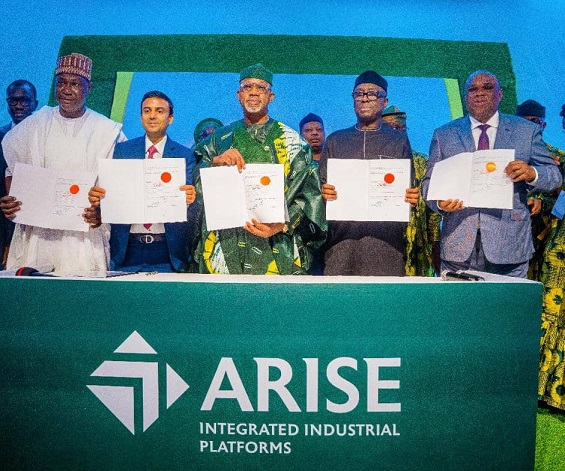 Ogun governor, Dapo Abiodun, on Friday, performed the groundbreaking of the development of the State Special Agro-Industrial Processing Zone (SAPZ) at the Agro Cargo International Airport.

The Governor had on Thursday disclosed that his administration will turn the sod of $800m Special Agro-Processing Zone to be sited at the Agro-Cargo Airport in Ilisan-Remo, today.

The first phase of the project worth $400m being executed in collaboration with Arise Integrated Industrial Platforms and Ogun state government, according to the governor, would be completed in 18 months.

Speaking further, Abiodun said that the special industrial park for agro-processing and allied products is the first of its kind in the country and would generate over 20,000 direct jobs and individual prosperity.

The governor added that the agro cargo airport will probably be the fastest constructed international airport on the continent.

He expressed his delight that the location of the airport that was till March 2021, a forest and dump site has now become the airport city.

Abiodun disclosed that apart from the SAPZ, the Nigeria Customs Service has decided to locate one of its biggest facilities in the country and made full payment of N3.2b for the first 100 hectares of land last week .

While noting that the ground breaking was a further testament to the re-established trust between government and the private sector, he assured that his administration would continue to work assiduously to earn the trust of private investors.

The governor added that the incumbent administration in the state would continue to engender policies and programmes that will remain people-oriented and enable the private sector to thrive.

Abiodun, while thanking the President of the Arise Group, Gangan Gupta, for keying into the vision of making Ogun the industrial hub in the country, equally acknowledged the President of the African Development Bank, Dr. Akinwumi Adesina, for his support and encouragement to pursue the realization of the project.

“I must then acknowledge and thank the President of the AFREXIM, Dr. Ben ORAMA, who I called to discuss further the PPP/SAPZ model with and who arranged the physical meeting wit ARISE and myself. Without the trust and confidence Dr. ORAMA had in me, which was the basis of the reference in the first place, we definitely won’t be here today.

“Of course all these had to be backed up by financing and I must thank the African Finance Corporation led by my brother, Zuberu Samaila, which ensured that the project was significantly derisked and AFREXIM bank for trusting us”, the governor stated.

He explained that the decision by his administration to turn the push factor from Lagos to the pull factor to Ogun, made it to introduce various policies and reforms, and also deploy technology to improve the efficiency of government and increase the state ranking on the ease of doing business index.

“Today, we are adjudged one of the safest if not the safest state in the country. We have constructed over 400km of both interstate roads in three years and six months and it is worth mentioning that we have at least one road in every one of our 20 local government areas and we have built over 1200 affordable homes across the state creating jobs for artisans.

“We will be back here very soon to commission our international agro cargo airport in another few months and our deep sea port is also loading”, Abiodun submitted.

The President of the ARISE Integrated Industrial Platforms, Gangan Gupta, said the company had invested in several African countries and he is happy to be in Ogun state, to contribute to its industrial development.

He added that the company would build industrial platforms that would transform the economy of Ogun.

Minister of Trade and Investment, Niyi Adebayo, in his remarks, described the project as a landmark and a step forward to the economic revolution of Nigeria.

He added that SAPZ would help in agri-industrialization and create jobs for the people, noting “this is going to be a regional trading hub.

While acknowledging that Ogun has a rich history in agriculture and agro processing in the country, the Minister commended the governor for his visionary leadership and brokering of the partnership which has attracted a multi million dollar project to the state.

The Chairman, the Senate Committee on Industries, Senator Adetokunbo Abiru, who described the project as an example of how the private sector can be harnessed for the economic development of Nigeria, expressed confidence that the SAPZ would boost the agricultural value chain, raise revenue, create jobs and boost export.

The Chairman of the African Finance Corporation, Sumaila Zubairu, said that the project sitting on 5,100 hectares of land, will change the landscape of Ogun in 18 months, noting that “through value-addition like this we can create jobs and wealth”.

“We will continue to play our role in enhancing the industrial development in Nigeria and Ogun”, Zubairu added.

Also, the AFREXIM Bank President, Benedict Oramah, attributed the peace and security in Ogun as key factors that attracted Arise Consortium to it, commending the governor for creating enabling environment for foreign investment.

In his welcome address, the Commissioner for Finance and Chief Economic Adviser to the Governor, Dapo Okubadejo, noted that the SAPZ signified a major milestone in the economic revolution of Ogun state.

He disclosed that no fewer than 30 laws had been enacted to simplify business operations and reduce administrative bottlenecks in the state, adding six business clusters were also established across the state, to enhance investment drive.