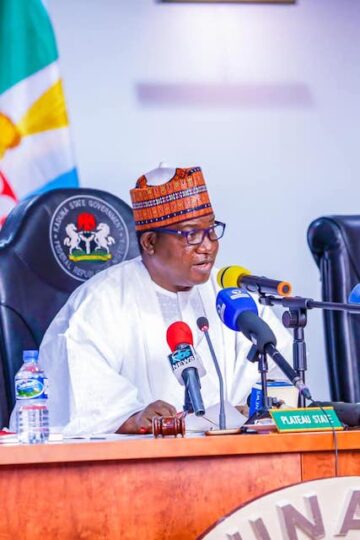 Director-General of APC Presidential Campaign Council (PCC), Gov. Simon Lalong, has inaugurated a 40-man Local Organising Committee (LOC), ahead of the flag-off of its presidential campaign in Jos.

Lalong, who inaugurated the committee on Sunday in Jos, said it was part of preparations toward ensuring the success of the event slated for Nov 15.

He urged members of the committee to ensure a hitch-free event, adding that it would create an opportunity for Plateau to revive its strategic place in Nigeria’s political history.

Lalong, who is the governor of Plateau, said that members of the committee were carefully selected based on their pedigree, loyalty, track record of service to the party and capacity to discharge their duties diligently.

“Do everything possible to ensure that we have a very colourful, safe, secure and memorable campaign flag-off,” he said.

He also enjoined them to ensure that supporters from local government areas were mobilised to the event, adding that such move would show that Plateau was an APC state.

”We must prove to our guests, the leadership of our party and indeed, Nigerians that APC is fully on ground in Plateau.

”Your terms of reference are to plan, organise and execute a successful APC presidential campaign.

“To avoid a hasty job, all sub-committees that will be formed should work round the clock, as time is of the essence.

“You liaise with the PCC toward ensuring a successful exercise,” he said.

The governor added that the committee should make any other arrangement that would ensure a successful event.

Earlier in his remarks, Chairman of APC in the state, Rufus Bature, described the task ahead of the party in the state as a prelude to ensuring its success in the forthcoming elections.

Responding, Chairman of the committee, Rep. Idris Wase, said that the party’s decision to kick-start its campaign in Plateau was an indication that the state was home to APC.

Wase, who is the Deputy Speaker, House of Representatives, assured Lalong that the committee would commence work immediately, adding that they would involve APC members in the discharge of duties, to ensure inclusiveness.

“We will have our inaugural meeting today in order to commence work, because we must not fail in carrying out this task,” he said.

The News Agency of Nigeria (NAN) reports that the Deputy Governor of Plateau, Prof Sonni Tyoden, is the Co-chairman of the committee.

Other members of the committee include: Prof. Danladi Atu, the Secretary to Plateau Government (SSG), Dr Nentawe Yilwatda, APC governorship candidate in the state, and the party Chairman, Rufus Bature, among others.