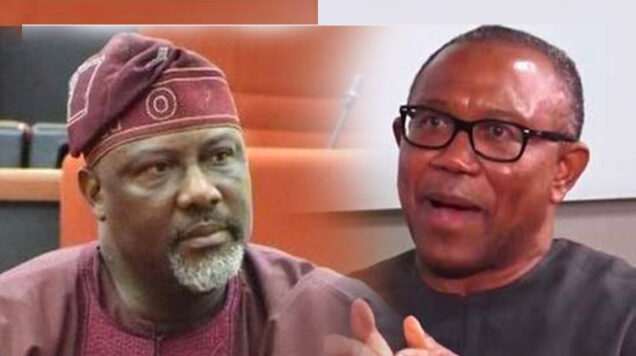 Dino made the demand after Obi snapped at him during the presidential town hall meeting organized by Arise TV on Sunday.

Trouble started after Dino Melaye was captured calling an attendee of the meeting ‘Obi people.’

As one of the attendees stood up to question the presidential candidates, Dino was heard saying “Na wa o, Obi people.”

On hearing the words of Dino, Peter Obi snapped at the PDP official.

Peter Obi spoke harshly from his seat, saying: “Stop that Dino. Why are you always calling me? I won’t take that. This man is from ANPP. Why are you calling him Obi people?”

Reacting to Obi’s outburst, Dino said he deserves an apology from the Labour’s presidential candidate.

Senator Melaye said: “I didn’t mention his name and I was really surprised to see that type of outburst from a presidential candidate, is that the type of president he is going to make? Just taking on people and showing unpresidential characteristics.

“I didn’t do anything, that outburst is unwarranted, very unpresidential, unacceptable of a leader. A leader must be mature, one who wants to govern this country must be accommodating, must have a lot of patience, must have perseverance, these are the basic characteristics of a leader anywhere in the world.”

Watch the video of Dino Melaye below: