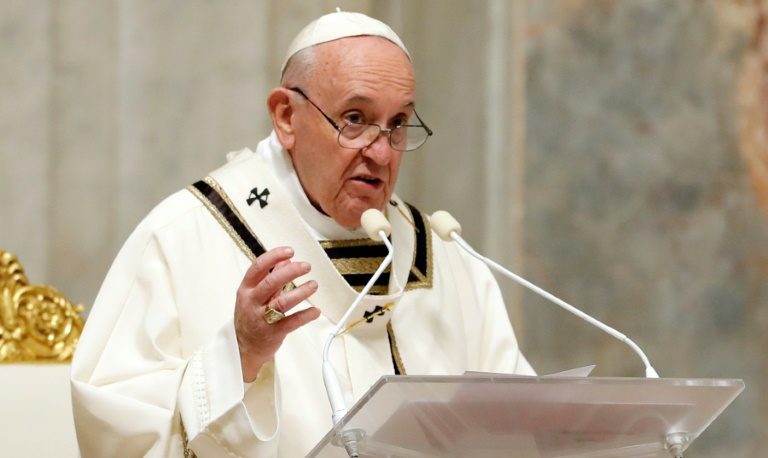 Pope Francis said the fight for women’s rights was a “continuous struggle”, and condemned male chauvinism as deadly for humanity and female genital mutilation as a crime that must be stopped.

He stated this on Sunday when returning from a four-day trip to predominantly Muslim Bahrain.

He didn’t speak of efforts to allow women to advance and join the clergy because the pope and his predecessors declared that the issue of women priests is resolved.

Francis started talking about women’s rights in general while responding to a query about Iranian women protesting.

“We have to tell the truth. The struggle for women’s rights is a continuing struggle,” he said, listing historic struggles such as the fight for the right to vote.

“We have to continue struggling for this because women are a gift. God did not create man and then give him a lapdog to play with. He created both equal, men and women.

“A society that is not capable of allowing women to have greater roles does not move forward,” he added.

However, the spiritual leader denounced male chauvinism, acknowledging there was still too much of it around the world, including in his native Argentina.

“This chauvinism kills humanity, he said

He also condemned as a “criminal act” female genital mutilation (FGM), repeating a major call he made in February on the U.N. International Day of Zero Tolerance for Female Genital Mutilation.

He spoke of women he has appointed to managerial roles in the Vatican, mentioning by name Sister Raffaella Petrini, a nun who as the deputy governor of Vatican City is effectively the most powerful woman there.

“I have noticed that every time a woman is given a position of responsibility in the Vatican, things improve,” he said.

He also cited the impact of five women he appointed to a department that oversees Vatican finances.

“This is a revolution in the Vatican because women know how to find the right way to go forward,” he added.

Francis has also appointed women as deputy foreign minister, director of the Vatican Museums, deputy head of the Vatican Press Office, as well as four women as councillors to the Synod of Bishops, which prepares major meetings.

The Church teaches that only men can become priests because Jesus chose men as his apostles.