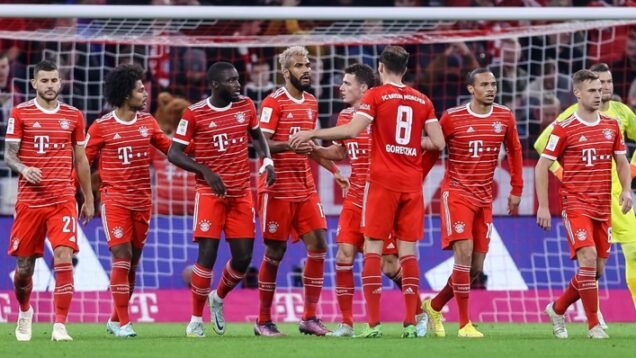 Jamal Musiala, Leon Goretzka and Mathys Tel were also on target for Julian Nagelsmann’s side, who equalled a club record by netting at least four goals in a fourth successive home league game.

It was not all positive for Bayern, though, as Sadio Mane limped off less than two weeks before the start of the World Cup, while Eric Maxim Choupo-Moting saw a penalty saved.

Werder had briefly equalised early on through Anthony Jung, yet they are now without a win in 30 meetings with Bayern.

Musiala put Bayern in front in the sixth minute, calmly slotting into the far corner after Mane’s initial effort was blocked, but Werder were level four minutes later when Jung tucked home from Mitchell Weiser’s lay-off.

Despite Choupo-Moting seeing his penalty saved and Mane limping off injured, the hosts regained the lead in the 22nd minute as Gnabry curled a brilliant effort beyond Jiri Pavlenka.

Bayern then hit their opponents on the counter twice in quick succession. Goretzka made it 3-1 after racing onto Joshua Kimmich’s throughball and rounding Pavlenka, before Leroy Sane latched onto Choupo-Moting’s precise pass and squared for Gnabry to slot into an empty net.

Julian Nagelsmann’s side scarcely slowed after half-time as Sane hit the post, while Pavlenka thwarted Gnabry’s attempted lob for the hat-trick.

He was not to be denied in the 82nd minute as he cleverly stepped inside a couple of challenges before poking home, and Tels put the icing on the cake two minutes later with a powerful finish into the top corner.