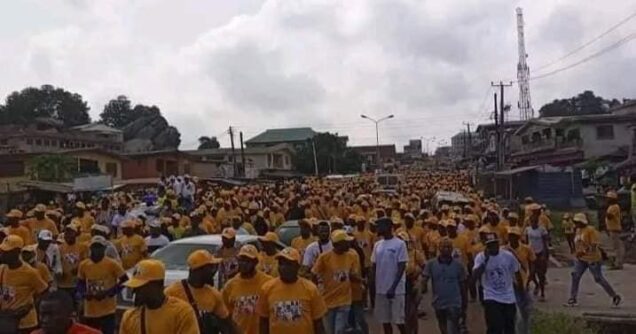 Ogun residents, supporters of APC walk in Abeokuta in support of presidential and governorship bids of Tinubu and Gov. Abiodun respectively

Governor Dapo Abiodun of Ogun declared on Tuesday that the election of Bola Ahmed Tinubu as Nigeria’s president was already a done deal given the number of people that trooped out in solidarity walk in support of his ambition in Abeokuta, the capital of the state on Tuesday.

Dapo spoke while appreciating the people of the state for showing massive support for Tinubu and his own second term ambition ahead of the 2023 presidential election.

He noted that the walk and the support was a testimony that Tinubu remained the peoples’ choice, saying his election in 2023 as president of Nigeria was already a done deal by the grace of God.

Ogun residents and supporters of AP staged a solidarity walk in Abeokuta on Tuesday to show their support for the presidential and governorship bids of Asiwaju Bola Ahmed Tinubu and Gov. Dapo Abiodun of Ogun, respectively.

The News Agency of Nigeria (NAN) reports that the walk began at the MKO Abiola Stadium, Kuto, Abeokuta, went through Isabo, Nawar-ud-Deen, Ijaye, Abiola Way and terminated at the NNPC junction.

“This massive crowd is enough to scare any opposition. The walk was planned just on Sunday and the crowd is intimidating, Governor Abiodun said.

“It is a show of love that you support Tinubu and Dapo Abiodun’s election victory in 2023.

“We are still going to hold a rally at the stadium and by February we shall cast our votes for all APC candidates,’’ he said.

Abiodun appealed to those yet to collect their Permanent Voter Cards (PVCs) to do so before the election.

“I appeal to those yet to collect their PVCs to collect them before election. Some PVCs have arrived, go and collect yours to be able to vote please,’’ he said.

Shotayo also noted that Tinubu remained the best candidate for the presidential election in 2023, saying that all his members would cast their votes for Abiodun and Tinubu.

Also, the Chairman of Road Transport Employers Association of Nigeria in the state, Alhaji Titilayo Akibu, said the walk was important.

He said it was a sign that Tinubu remained the choice of Ogun people in 2023.

Akibu also reiterated the support of the union to Abiodun’s re-election, saying that the state had witnessed economic growth under him, hence, the need to re-elect him as governor.

Popular Nollywood actors like Ebun Oloyede (Olaiya Igwe) and Taiwo Hassan (Ogogo), were among other thespians in attendance. (NAN) (www.nannews.ng)