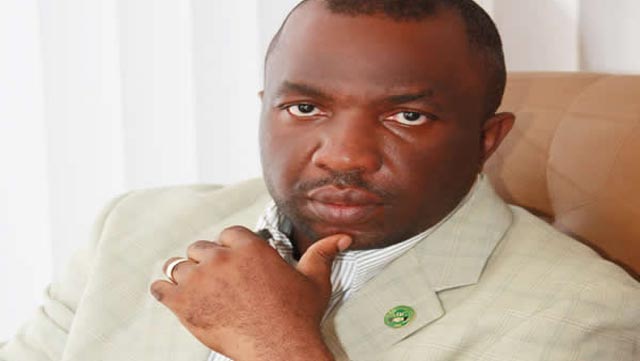 The National chairman of African Democratic Party (ADC), Chief Ralph Okei Nwosu has declared that the former governor of Ogun State who is also the Senator representing Ogun Central at the National Assembly, Sen. Ibikunle Amosun has right to support any candidate of his choice from any political party.

Senator Ibikunle Amosun, a member of the All Progressives Congress (APC) recently said he will not support the candidate of his party and incumbent governor of the state, Dapo Abiodun’s bid to seek re-election in 2023.

Instead, the former governor said he will support the governorship candidate of ADC, Barrister Biyi Otegbeye in the 2023 election.

Amosun support for opposition governorship candidate has, however generated controversy and panic within the APC.

However, Governor Abiodun has said he is not deterred by lack of support from Amosun.

Reacting to the controversies at the press conference in Abeokuta, the Ogun State capital on Monday, Nwosu said Sen. Ibikunle Amosun is a progressive minded person and a statesman who will do anything for the betterment of Ogun State and Nigeria as a whole.

He also assured that Amosun will officially join the party.

He noted that former president Olusegun Obasanjo has also endorsed the party, which made ADC the party for Ogun State.

However, while fielding questions from newsmen, Nwosu described the recent endorsement of Gov. Abiodun by the traditional rulers in Yewa Land as a decision comes out of panicking.

“For a former governor and former presidential aspirant and a senator cannot just be a member of a political party, but a leader in the country. He is an institution of his own right. As an institution, he can say that, in our state this is where we should go and that is why Amosun is so special. In Ogun state, in ADC and in Nigeria as man of God as said that ADC will take over Nigeria and that is what Sen. Amosun will do.

“Our leaders in communities are statesman. For instance, Obasanjo adopted ADC. He is a former president of Nigeria from PDP party. But as a statesmen, he endorsed ADC

“For a governor to go and meet traditional rulers and they endorse him, it is because they are jittery.

In his speech, Prophet John Kayode Anifowose described himself a angel whom God has sent a message through to the party.

He said ADC is the party which God has chosen to bring Nigerians out of their suffering and it will start from Ogun state in 2023.

“I am angel of God here, prophets are meant to guide like other past prophets guide. I’m not a card carry member of this party. Since God has shine his light and choose ADC as his Messiah’s motor for the people of Ogun State, some other states and the whole nation, automatically as a prophet I become a member of this party in order to use my spiritual grace in prayer, in fasting to direct the Salvation of Noah of this party.”