The US mid-term Elections: Why they should matter to you 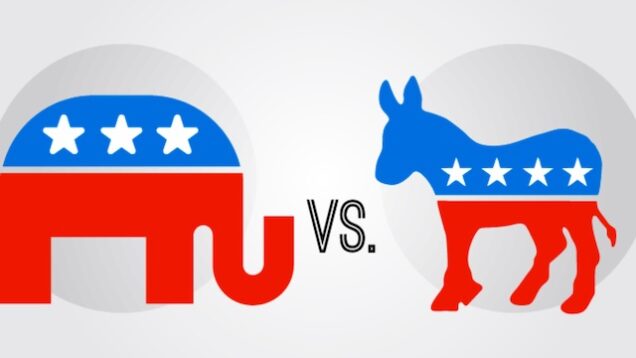 US Democratic and Republican Logo Designs

The mid-term elections in the US will hold today. All the 435 seats in the House of Representatives, and 34 of the 100 seats in the Senate, which make up the US Congress are being contested for. Also on the electoral cards are 34 of the 50 governorship positions.

Projections favour the Republicans to gain the majority in both Houses and therefore end the dominance of the Democrats in Congress. For most Americans, the most pressing concern is the economy, especially the rising inflation illustrated by the high cost of groceries and gas.

The Democrats have tried to make the mid-term about social issues such as abortion rights, LGBT and civic freedoms, which they say would be limited with a Republican-controlled Congress. That doesn’t seem to have worked as poll after poll shows that the economy is the number one priority of most voters. This doesn’t bode well for President Joe Biden and his Democratic Party.

Biden is polling poorly, around the region of 40 per cent and doesn’t seem to have the political clout and charisma to propel the Democrats to win the crucial races. Obama and Clinton, two former Democratic presidents of the US, have joined the campaign trail, canvassing for various party men and women.

If, or when, the republicans win, the implications will be dire and far-reaching. It could figuratively speaking be the end of Biden’s presidency as it would be difficult for him to achieve his progressive agenda with an opposition-controlled Congress. Even now with the razor-thin majority of the Democrats in the Senate, it is difficult for him to get his agenda through the Senate because of the hold-out of Senator Joe Manchin of West Virginia. Although a Democrat, Manchin is extremely conservative and blocks many of the President’s liberal goals that he considers too extreme such as his climate and tax agenda.

A congress controlled by the Republicans would make life extremely difficult for Biden. They may stop the investigation into the January 6th capitol attack, which is looking to indict former President Donald Trump. They may also frustrate President Biden’s plans for debt relief for former students, limit support and financial aid to Ukraine, as well as instigate several investigations of his administration which ultimately may lead to his impeachment!

As a liberal person, the most probable impact of a Republican majority in Congress for me would be the blocking of Biden’s judicial nominees, especially in the Supreme court. This happened to Obama and he couldn’t fill crucial vacancies in the Supreme Court because of a dominant Republican Senate, which made such vacancies available to be filled by President Trump upon being sworn in.

Trump subsequently packed the Supreme Court with right-wingers – Justices Neil Gorsuch, Brett Kavanaugh and Amy Coney Barrett – who have made rulings with far-reaching consequences. Even matters such as Wade and Roe, the eponymous ruling on abortion, were upturned by the extremely conservative US Supreme Court. Other decided matters likely to be revisited by the Supreme Court include the affirmation action, which seeks to correct the historic discrimination against African Americans. The Court will likely rule against this soon. Many LGBT rights, including the right to marry, which seem settled may also be overturned by the Supreme Court.

Considering that the US Supreme Court Justices keep their position for life, the conservatives may dominate the court for a long time and therefore shape America’s thoughts, ideas and legislation. If the Democrats lose Congress, this would all but erase their chance to appoint a US Supreme Court judge in the unlikely event that there is an opening soon.

Then also, the elections may foreshadow the next US presidential election. A definite and convincing victory for the Republicans will serve as a bounce for them going into the next presidential election in 2024. It could signal a return for the maverick Trump, or the new poster boy for republicanism Governor Ron Desantis of Florida. Or even the former Governor of South Carolina and US Ambassador to the United Nations, Nimrata Nikki Haley, who has Indian ancestry.

Unless the Democrats outperform, the future seems dire and bleak for progressives and liberal folks around the world. A new Republican government in the US, like with Trump, may be conciliatory to Vladimir Putin and other ‘bad guys’ such as Kim Jong-un of North Korea and recede to the ‘America first’ of the Trump era. This would have serious implications for world affairs, especially in respect of partnerships to tackle climate change, which the Republicans decry, and other pressing global concerns.

A future Republican government would possibly limit emigration to the US just as Trump did and many Nigerians who seek to ‘japa’ to America may discover that the opportunities are gone with a Republican win. In all, as is often the case with the US, whatever happens there end up having consequences far beyond its borders. So we keep our fingers crossed, watching keenly to see if the liberals or the conservatives will come out as victors.