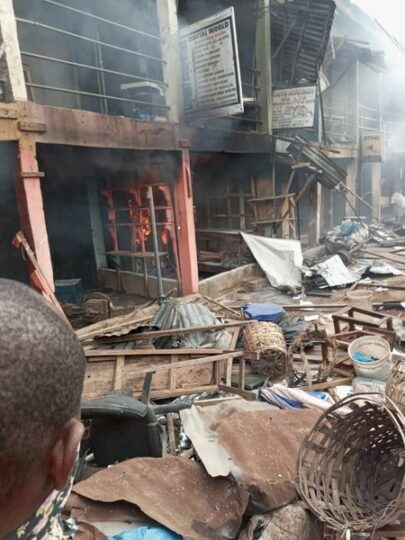 The inferno at the market

The Police as well as well as Anambra Fire Services have said the number of casualty in the chemical market fire explosion in Onitsha Head Bridge is not yet known.

But Director/Fire Chief of Anambra Fire Services, Mr Martin Agbili in a statement signed by Agbili on Wednesday in Onitsha said 80 shops were destroyed in the inferno.

”It is really a terrible situation but the fire is under control now. The vibration from the explosions caused the collapse of some market buildings.

“A lot of safety measures have been taken to protect the entire market. There are casualties but we can’t ascertain the actual number of death and the injured”, he said.

The fire also destroyed goods and properties worth millions of naira.

On his part, DSP Tochukwu Ikenga, Police Public Relations Officer, Anambra Command said the police was yet to be furnished with the casualty rate at the fire explosion in the chemical market in Onitsha.

Ikenga stated this on Tuesday in a telephone with the News Agency of Nigeria (NAN) in Onitsha.

“But I can confirm to you that there was fire explosion at the chemical market and our operatives led by DCP Operations, John Ogbodaga are on ground.

“The area has been cordoned off, the fire service were also on ground and the situation is under control,” he said.

It was earlier reported that no fewer than four persons were reportedly confirmed dead and about 20 sustained various degrees of injuries.