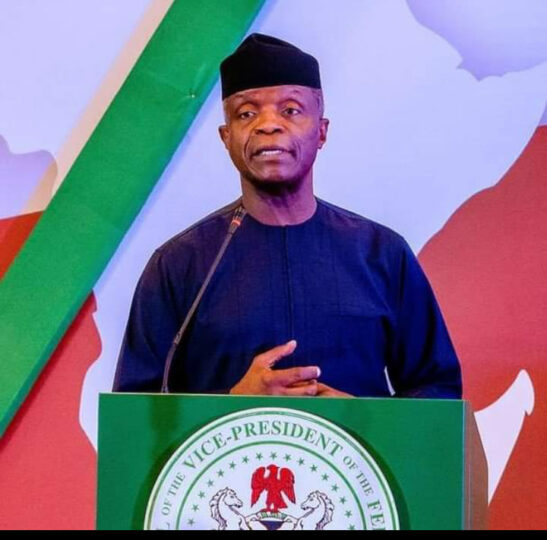 Nigeria’s Vice President Yemi Osinbajo says only strong partnerships and coordination among African countries can guarantee the mobilisation of resources required for a just energy transition.

Osinbajo’s spokesman, Laolu Akande, in a statement on Wednesday in Abuja, said the vice president sent a recorded message to an African Union event at the ongoing CoP27 in Egypt.

The message was for the unveiling of the 4D Digital Green Industrial Corridor and launch of the African Union Transition Fuels Oversight and Regulatory Management Accelerator (TRANSFORMA).

According to the vice president, the case of the African continent, particularly with respect to the just energy transition, is cogent and irrefutable.

“Tackling the combined challenges of COVID-19 recovery, climate change and overall sustainable development requires significant resources that can only be delivered through strong partnerships and coordination.

“For instance, the Climate Policy Initiative estimates that Africa needs about 2.8 trillion dollars between 2020 and 2030 to implement our Nationally Determined Contributions (NDCs) under the Paris Agreement.

Osinbajo said that adding innovations like the 4D Digital Green Corridor and TRANSFORMA, by creating ready platforms for Pan-African collaboration, were critical to financing and more broadly, resource mobilization on the continent.

He said that it was exciting to see that the launch came as other initiatives such as the African Carbon Market initiative was being announced.

“Many of our challenges and priorities are shared. African governments are tasked with eradicating poverty, providing opportunities for our expanding populations, delivering robust healthcare solutions and unlocking prosperity for future generations.

“Beneficial role of Pan-African cooperation on these issues has been established.

“Reports from the World Bank estimate that the AfCFTA could raise income on the continent by over 450 billion dollars by 2035 and lift 50 million people out of extreme poverty. Importantly, the continent could see foreign direct investment increase by between 111 per cent and 159 per cent under the AfCFTA.

“Maximization of this potential which is what the 4D Digital Green Industrial Corridor and TRANSFORMA propose to do must be a priority”, Osinbajo said.

He emphasised the need for stakeholders to be united in order to attract more attention.

Other leaders who spoke at the event included President Felix Tshisekedi of the Democratic Republic of Congo and President Hakainde Hichilema of the Republic of Zambia.