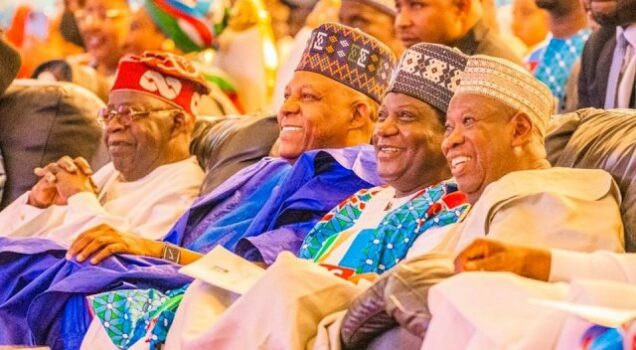 L-R: Tinubu, Shettima, Lalong and Ganduje at the inauguration of the Women's Campaign Team in Abuja.

Governor Simon Lalong said Nigerians are lucky that the presidential candidate of the APC, Bola Tinubu, is ready to serve the country at this time.

Lalong, who is the Director-General of Tinubu-Shettima Presidential Campaign Council, stated this during Tinubu’s town hall meeting with mining and agro-processing stakeholders in Lafia, Nasarawa State capital on Thursday.

Governor Lalong, however, described the Lafia Town Hall meeting as another worthy engagement between Tinubu and critical stakeholders in Nasarawa State after similar events in Kano, Lagos, and Niger States.

He also said Nasarawa is the home of huge solid mineral deposits that have remained untapped with attendant insecurity caused by illegal miners promising, Tinubu as the next President of Nigeria would squarely address this during his tenure.

‘Tinubu is a man with an untainted record of solving challenges. We are lucky he is ready to serve our country at this time,” said Lalong.

Adamu charged Tinubu to get ready to lead Nigeria to the Promised Land.

He re-echoed the position of President Muhammadu Buhari that all indicators and indications point to the fact that the APC Presidential candidate is the next President of Nigeria.

On mining opportunities in Nasarawa State, Adamu said his state is endowed.

“On mining sector, every local government in Nasarawa State has a solid mineral deposit. I can say this with authority as former Governor of this state and Chairman of the Senate Committee on Solid Minerals. I don’t want to say Nasarawa has potentials but I will say the huge opportunities are here.

“We are tired of potentials in this country, we want to see the real things. Nigerians need to see the Action Plan of our candidate and they will see in detail what Tinubu and our party want to do. We are convinced our tomorrow will be better than our today,” he said.

Tinubu had earlier said he would prioritize the resuscitation of the nation’s economy through the development of the solid mineral sector.

He appreciated Nasarawa State Governor Abdullahi Sule for giving him the opportunity to share his vision.

He said: “Few nations are as well-endowed as Nigeria, given our industrious, energetic population and our vast inventory of land, water, and natural resources. Our beloved nation has abundant, commercially viable solid mineral deposits such as coal, limestone, iron ore, bitumen, lead, zinc, gold and a variety of gemstones.

“It is the obligation of government to use these gifts wisely to benefit the nation and improve the living standards of the average Nigerian.”

On his plans for the sector, Tinubu promised to make the Ajaokuta Steel Company fully operational again.

He also added that the sector would contribute more to the nation’s economy by building the GDP.