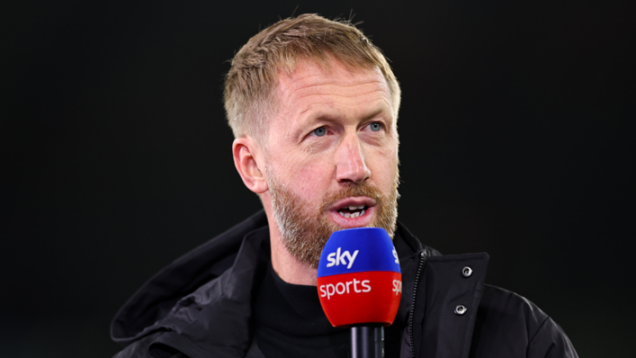 Chelsea manager Graham Potter believes Wednesday’s 2-0 EFL Cup loss to Manchester City was a “step forward” for the Blues despite suffering their third defeat from their past four games.

The Blues have only won two of their past seven games under Potter, who replaced Thomas Tuchel in September, amid a poor run of form.

Potter made seven changes to his starting line-up from the side that went down 1-0 to Arsenal in the Premier League on Sunday but was enthused albeit disappointed by the defeat.

“I thought there were quite a few positives,” Potter told reporters. “Obviously, we’re disappointed with the result but in terms of how we played, we created some good chances, there was a better structure and performance level.

“The team looked closer to what we want it to look like [compared to Arsenal]. The boys had great courage and they tried against a top team.

“Their goalkeeper got man of the match and I think that tells a little bit of the story. But overall, I think it was a step forward for us.”

Potter’s side goes to third-placed Newcastle United in the Premier League on Saturday in their final game before the World Cup break.

“We’re concerned when we don’t get the results we want,” Potter said.

“Our performances have not been what we want either in the last couple of games. Tonight was a big step in terms of how we want to play, and we can get confidence from that.

“It’s a big game at Newcastle, 5.30 on the TV, it’ll be a fantastic atmosphere. They’re doing really well, so it’ll be a tough game, but we have to try and go there and get the three points.”

Potter was impressed with 18-year-old midfielder Lewis Hall after the England youth international earned his second career start for the Blues.

Hall played 75 minutes and had a good chance saved by City goalkeeper Stefan Ortega late in the first half in an energetic display.

“I really enjoyed his performance,” Potter said. “He took responsibility, took the ball in tight areas, attacked the box, and could’ve scored a couple of goals on another day.

“It was a really nice performance, a mature performance I thought. He is a quiet lad but goes about his work. I’ve been really impressed with him.”