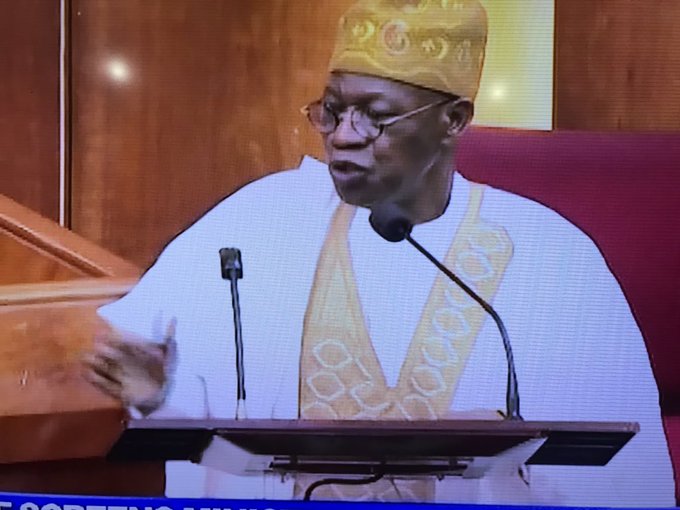 The Federal Government says it will not allow any social media platform to plunge Nigeria into crisis by spreading fake news and hate speech.

The Minister of Information and Culture, Alhaji Lai Mohammed, said this on Thursday in Abuja at the third edition of the “President Muhammadu Buhari’s Administration (PMB) Scorecard 2015-2023” programme.

The PMB Scorecard initiative is organised by the Ministry of Information and Culture to showcase the achievements of the administration in the last seven years.

The third edition featured the Minister of Aviation, Hadi Sirika, who reeled out the achievements recorded by his ministry.

In his opening remarks, Mohammed said the warning to the social media platforms became imperative because of the spike in fake news and disinformation following the change in ownership of a micro-blogging site, Twitter.

“Permit me to quickly address an issue that has elicited a lot of inquiries from the media in recent times.

“Many of your colleagues have called to ask us what will become of our agreement with Twitter in view of the change in its ownership.

“Many have asked for our reaction following reports that there has been a spike in fake news, disinformation and hate speech since the micro-blogging site changed ownership.

“Many have even asked us if another ban is in the offing.

” Let me say this: We are closely monitoring the evolving developments at Twitter.

“It has never been our intention to ban any social media platform or stifle free speech. Not at all.

“But we will also not sit by and allow any platform whatsoever to throw our nation into crisis,” he said.

The minister recalled how the Federal Government in June last year suspended the activities of Twitter in the country for allegedly allowing its platform to be used by those who wanted to destabilise the country.

NAN reports that the suspension was, however, lifted in January this year after Twitter agreed to regulate its posts, pay an applicable tax and establish a legal entity within the country among other conditions.

“What happened in the case of Twitter is well known to all.

” Twitter became a platform of choice for those who want to destabilise Nigeria using fake news, disinformation and hate speech.

“No nation will allow any social media platform to plunge it into anarchy.

“We have no intention of banning any social media platform again,” he said.

On the scorecard series, the minister said the aviation ministry had notched up huge achievements since coming into being.