Napoli extend Serie A lead with 11th win in a row 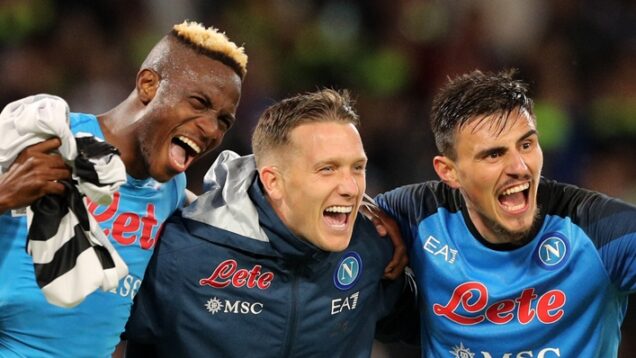 Napoli extend Serie A lead with 11th win in a row

Napoli saw off a late comeback from Udinese to seal an 11th consecutive Serie A victory, the first time they have done so in a single season.

Goals from Victor Oshimhen, Piotr Zielinski, and Eljif Elmas had the hosts in full control but two goals in the final 11 minutes, from Ilija Nestorovski and Lazar Samardzic, led to a nervy finish for Luciano Spalletti’s side.

Standing firm to hold on for a 3-2 victory, Napoli moved 11 points clear of Lazio at the summit of Serie A.

Lazio face Juventus on Sunday after Spalletti’s side became only the second team to win at least 13 of their first 15 matches (Juventus having done so on four previous occasions, most recently in 2018-19).

Stretching back to last season, Napoli stand undefeated in their last 19 Serie A matches and have won 17 of those games, scoring 50 goals in the process.

Napoli now face an extended break due to the World Cup in Qatar, not taking to the field again until January 4 for what could be a stern challenge against Inter.

The Neapolitan side have won Serie A just twice before in their history, with their last such triumph coming in the 1989-90 season.