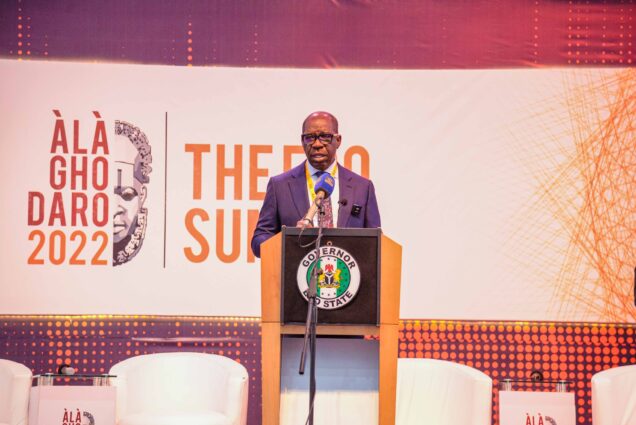 Governor Godwin Obaseki of Edo has said manufacturing is the way to go to revive Nigeria’s dwindling economy.

He stated this Friday, at the 6th edition of Alaghodaro Investment Summit, holding in Benin City, the state capital, with the theme: Edo’s Transformation: Partnerships, Resilience, Impact.

The summit is organised yearly, in partnership with the private sector, to mark the anniversary of Governor Godwin Obaseki in office and showcase the progress being recorded in transforming the state into an investment haven.

He said: “Manufacturing is the way to go. Edo has the largest onshore gas reserve in Nigeria with most of our other gas in the swamps and the offshore. With that energy source, there’s no reason we cannot generate enough energy to attract investors to drive industrialization.

“Agriculture; that’s what we grew up with. Of our 19 million square kilometres of land, there’s practically no way we cannot grow something. For us, the future is technology, because the world is talking about technology and that is the new area of focus.

“In spite of all the challenges that face as a country, we have over 200 million people who are going to be 450 million in 2050 and will not stop consuming. Therefore, if this is our reality, it means that we cannot and should not be despondent.

“God has given us something that he has not given to many countries around the world. We have a huge domestic market and these over 200 million people have to consume. If we cannot import, are we going to die? We will have to create the things we consume in this country.

He added that Edo state is capable of generating enough to attract investors, and in turn, drive industrialization while his government hopes to raise over N60 billion from internally generated revenue in year 2023.

According to him, “In the last six years, things have not been easy, but we have tried in our own little way. You can see that from 2016 when we got in, we tried to increase Internally Generated Revenue (IGR). Except for the COVID-19 year, we sustained an increase in our IGR and we hope to end the next year with over 60bn IGR.”