Galtier admits to being worried about fielding Messi, Neymar, Mbappe 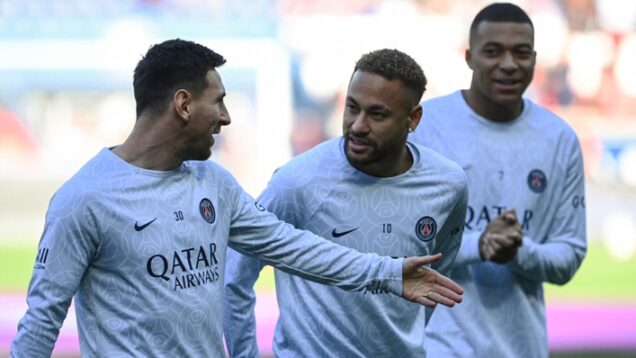 Galtier admits to being worried about fielding Messi, Neymar and Mbappe

Christophe Galtier admitted he was concerned about fielding Lionel Messi, Neymar, and Kylian Mbappe in Paris Saint-Germain’s final match before the World Cup.

Messi returned from a minor Achilles injury to join Neymar and Mbappe in PSG’s star-studded attack for their routine 5-0 win over Auxerre at the Parc des Princes on Sunday.

Mbappe opened the scoring early on before Carlos Soler scored one and set up Achraf Hakimi for another as PSG eased towards a seventh straight win in all competitions.

Galtier was able to replace Messi and Neymar in the 75th minute, with substitutes Renato Sanches and Hugo Ekitike helping themselves to a goal apiece.

While the superstar forward trio were eager to play a part in the contest, Galtier was glad all three came through unscathed before heading off to Qatar.

“We only conceded one chance and had a serious match that everyone wanted to play. Nobody was particularly concerned about the World Cup.

“It was probably me who was the most [concerned]. That’s why I wanted to relieve Ney and Leo. Kylian stayed on the pitch, but he is 23 years old.

“Ney had also stopped in the middle of the week during a session, while Leo was coming back from an overload in the calf. I’m happy with the entries of Renato and Hugo.”

PSG have gone 22 matches without defeat under Galtier, winning 18 of those, and enter the World Cup break five points clear of surprise package Lens.

The Parisians have reached the 40-point mark after 15 games for the fifth time in their history, with no other team in Ligue 1 history doing so on a single occasion.

Galtier will now enjoy a short hiatus, which includes taking in a few World Cup groups in Qatar, the home of PSG’s mega-rich backers.

“I’m going to take advantage of being with my family and my granddaughter,” he said.

“And then I’m going to Doha for four days to see three matches, including the match for the France team, alongside my president and my leaders.”

Sunday’s contest marked the first time since Messi arrived ahead of last season that PSG have scored four goals in a row without one of their superstar attackers being involved.

It was also a welcome first clean sheet in five matches for Galtier’s side, with defender Presnel Kimpembe being used as a substitute ahead of linking up with the France squad.

“The World Cup is something we’ve been thinking about for a while, albeit in the back of our minds,” said Kimpembe, who has had hamstring issues this season.

“Now the first part of the season is over, we can focus solely on the France team. I was never worried about picking up an injury beforehand.

“Playing minutes today felt good. I am feeling positive, but the fact I was brought onto the field shows everything is fine.”