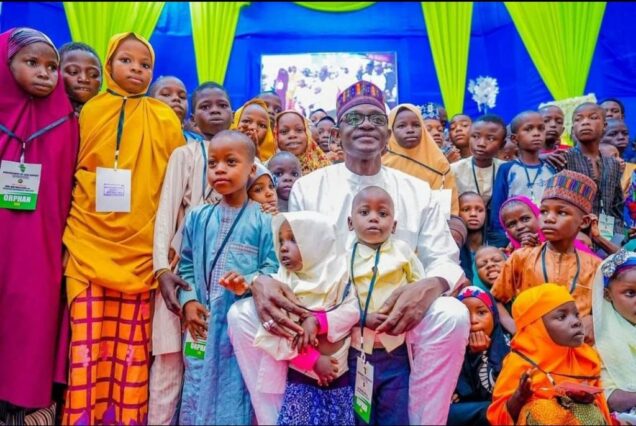 Governor Buni and the orphans

Governor Mai Mala Buni of Yobe state said he is supporting 200 orphans with the sum of N50,000 each to be self-reliant.

Buni made this known while hosting 200 orphans from the 17 local government areas of the state on Saturday in Damaturu.

He also directed the Ministry of Wealth Creation, Empowerment and Employment Generation to provide 400 widows with empowerment packages for self-reliance.

According to the Governor, the orphans deserve care from government and the society.

Buni said it is necessary to support and give orphans and other vulnerable groups a sense of belonging.

“Our decision to wade into supporting the orphans and widows, among other vulnerable groups, is to empower them with start-up capital for self-reliance.

“We must join hands together to help those who lost their parents, taking into cognizance the decade-age-long insurgency suffered across the state.

Meanwhile, he commended the Qatari Foundation for its infrastructural support to orphans and vulnerable people across the state.

Ustaz Babagana Kyari, the Coordinator of the programme, commended Gov. Buni for his consistent concern for the plight of orphans and widows in the state.

Kyari, who is also a Special Adviser to the Governor on Religious Affairs, said the gesture was not the first of its kind.

“This is the second time the governor is directly supporting another set of 200 orphans with cash.

“This gesture will surely go a long way in cushioning the hardships of making ends meet” Ustaz Kyari said.