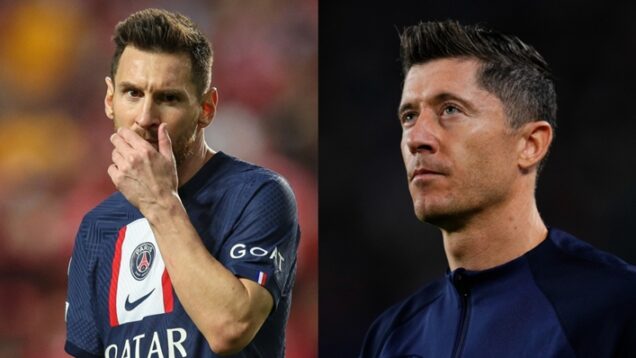 Robert Lewandowski says “it would be a dream to play” with Lionel Messi amid speculation the Argentina star could return to Barcelona.

The Poland striker will face Messi at the World Cup in Qatar in Group C, though rumours persist the pair could play on the same team as the seven-time Ballon d’Or winner eyes a return to Camp Nou.

Blaugrana president Joan Laporta reiterated the Paris Saint-Germain forward “always has his home” at Barca, who were unable to keep Messi in August 2021 due to well-documented financial struggles.

While Lewandowski claimed to have no knowledge surrounding the speculation, the former Bayern Munich striker would love to combine with Messi if the opportunity arises.

“Messi is absolutely brilliant with the amazing passes he plays to the striker,” he told Marca. “If you think about Messi, he has this brilliant connection with strikers.

“He knows how to put the ball into the box, between the lines… he’s the best in the world at that. I don’t know what’s going on right now, but for a striker it would be a dream to play with Lionel Messi for sure.”

The mouth-watering prospect of two of world football’s most exciting attackers aside, Lewandowski will consider Messi a rival as the 35-year-old leads one of the pre-World Cup favourites in the Middle East.

“I think Argentina with Messi are one of the favourites to win the World Cup,” Lewandowski added. “They haven’t lost in 30 games; they play well and you can see they are a really good team.

“If you look at football for the past 10, 15 years, the main two figures have been Messi and Cristiano Ronaldo and, in the end, if you think about who deserves to win this World Cup, these two names always pop up.

“They are legends. But on the flip side, this is football and you can never say what is going to happen because it’s a dramatic and unpredictable game.

“But in Messi’s case, it’s impossible for his achievements to be replicated as his amazing story continues. Now he’s dreaming to win the World Cup.

“For him, that’s the big challenge. He wants to now win the World Cup with Argentina, but this is a World Cup and you can never know what is going to happen.”

As for Poland’s chances in football’s biggest tournament, Lewandowski acknowledged his side must be at their best to escape Group C, which also contains Saudi Arabia and Mexico.

“It’s a huge challenge and it’s a very tough group, each game will be difficult,” he continued. “In the World Cup, it’s important to know how you’re going to play.

“For everyone playing in Qatar at this part if the season, it’s a huge challenge.

“We have to be ready for this, we have to fight from the first minute and it doesn’t matter how hard it’s going to be, you have to show your best.”