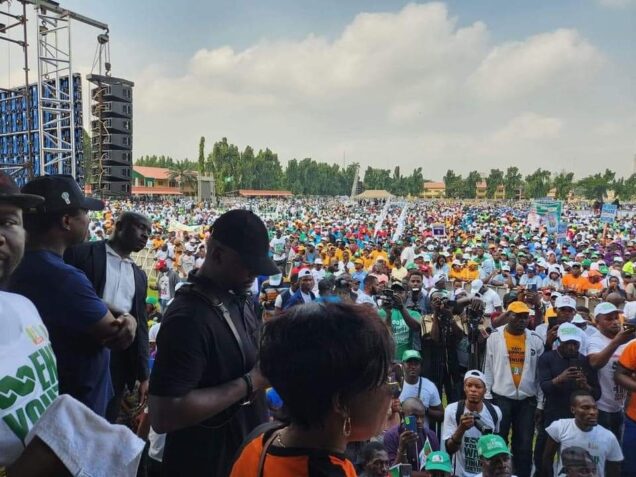 The Bola Ahmed Tinubu Presidential Actualisation Movement (BAT-PAM) staged a mega rally on Sunday in Kaduna in support of the presidential candidate of the All Progressives Congress (APC).

The group said it would deliver four million votes to the APC’s presidential candidate in the 2023 election.

The rally was organised in collaboration with another support group, 100 PerCent Focus Movement, to sensitise and encourage Nigerians to participate fully in the electoral process and vote for Tinubu in 2023.

Coordinator of BAT-PAM, Mr Abdulhakeem Ajeseku, told newsmen at the rally that Tinubu and his running mate, Sen. Kashim Shettima have what it takes to pilot the affairs of the nation if elected.

He said they have enviable track records and are result-focused persons.

“We are going to give nothing less than four million to five million votes to Tinubu and Shettima.

“We shall give same to Sen. Uba Sani, our governorship candidate; to our senatorial candidate, Alhaji Muhammad Sani Dattijo and Bello El-rufai.

“We are residents of Kaduna and to that end, we want to give full support to all APC candidates in the state,’’ Ajeseku said.

In his remarks, Malam Abubakar Tanimu, the Northwest Zone Coordinator of 100 Per Cent Focus Movement, said the analysis of the group on Tinubu and Shettima was positive hence the support being given.

“For the sanctity and sanity of this country, we believe as a group that power should shift to the south.

“Of all the candidates from the south, we saw that Bola Tinubu has the credentials, antecedents and capacity in terms of human capital and infrastructure development and wealth creation.

“Looking at all the groups we are working with, we intend to give our candidates four million votes as we have done in similar activities in Lagos and Abuja.

“We are hoping to do a similar thing in Ilorin,’’ he added.

Tanimu said the group was working with many other support groups including the Tinubu Vanguard and the APC Youth Mobilisation Network populated predominantly by youths.