101 die in auto crashes in Gombe 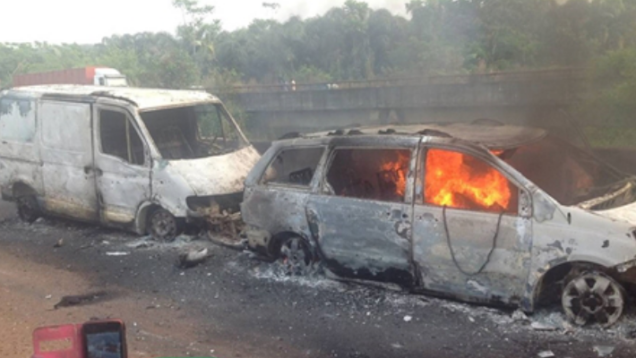 The Federal Road Safety Corps (FRSC) in Gombe State says it has recorded 101 deaths in 271 auto crashes from January till date.

Mr Felix Theman, the Sector Commander of the corps disclosed this at a press conference as part of activities to mark the 2022 Africa Road Safety and World Day of Remembrance for Road Traffic Crash (RTC) Victims, on Wednesday in Gombe.

He said that 894 of the 1,493 persons involved in the accidents sustained varying degrees of injuries, adding the crashes involved 550 motorcycles, tricycles, buses, trucks, tankers and articulated vehicles.

According to him, speeding, wrongful overtaking, tyre bursts and use of phones while driving accounted for about 70 per cent of the crashes recorded within the period under review.

He disclosed that the routes most prone to road traffic crashes were within the Gombe metropolis including the newly barricaded Western Bypass, accounting for about 60 per cent of the accidents.

He cautioned motorists in the state to be more patient and avoid hurrying while on the road.

Theman said more deployment and surveillance would be deployed to enforce traffic rules and enhance safety on the roads.

“We are setting up a response team to ensure speedy response towards saving more lives.

“We are collaborating with the state Ministry of Health and Red Cross Society to improve on response and rescue.

“We are going to station ambulances at strategic locations across the state,” he said.

On the 2022 World Day of Remembrance for RTC victims, Theman said the day was set aside to remember victims of RTC and their families.

The Sector Commander said road crashes had claimed the lives of “many breadwinners “leaving behind children who now face numerous challenges.

“This is why we must be careful while on the road; prioritise our safety and obey traffic rules.

“RTC is a pandemic with social, economic and public health dimensions”.