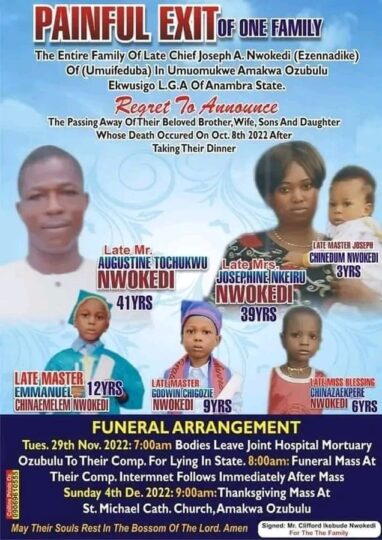 Poster for the burial of the entire family that died after eating a meal at a community Ozobulu in Anambra, State.

Preparations are in top gear for the burial of the entire family that died after eating a meal at Umuomukwe Amakwa, Ozobulu in Ekwusigo Local Government Area, Anambra, State.

An obituary poster that is currently trending shows the family of six, consisting of the parents and four children aged between the ages of three and 12.

Though the exact meal the family ate is not revealed in the obituary, the tragedy is currently generating reactions on social media, with many expressing shock and saying it was an act of evil.

The family will be laid to rest on Tuesday 28 November at the family compound in Amakwa Ozubulu after funeral mass.