LNSA, stakeholders jaw-jaw on how to effectively police Lagos 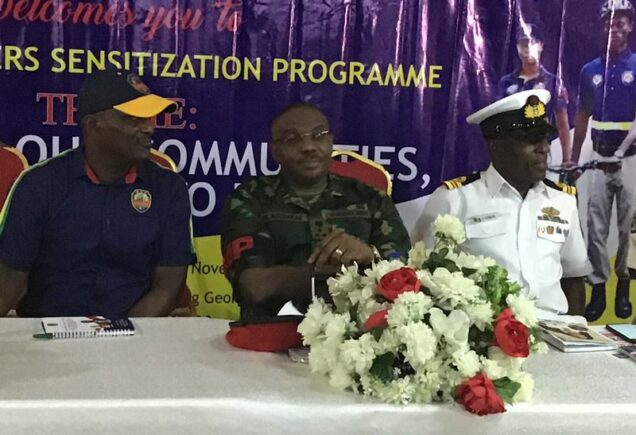 L-R: Oyekan, Abubakar and Egbunu at the event

The Lagos State Neighbourhood Safety Agency (LNSA) on Tuesday jaw-jaw with stakeholders on how to effectively police the state.

The event, organized by the LNSA, with the theme: “The Role of the Populace in Effective Law Enforcement,” was held on Lagos Island.

General Manager, LSNA, Dr. Ifalade Oyekan lamented that the nation is faced with serious insecurity today, as everybody kept on complaining about the pathetic situation.

He said Security and Governance formed part of the THEMES agenda of Governor Babajide Sanwo-Olu’s administration, while given Lagos government a pass mark in securing the state through collaboration with security agencies and others.

“As the name suggested, Neighbourhood, we are not posted to other states, every officer is posted to their community and they can tell you for free what is happening in their communities. That is what RRS, police are enjoying from us and we give intelligence to them every week.

“This is an election time and it is time we rob mind, what is the role of the populace toward security? If you see something, you say something and follow it through,” he said.

Oyekan said the LSNA cannot do the job of policing the state alone, but needed the collaboration of security agencies and the populace to effectively police the state.

He disclosed that the agency had gotten approval for seven units and departments from the government, saying “we have a department, the Forest Ranger, there is no way we can do this without the army and navy because we need to know what is happening in our forests.”

The Commander, RRS, CSP Yinka Egbeyemi, who was represented by SP Oluwaseun Philip, said there was the need for all to collaborate to fight insecurity in Lagos.

He also said security matters should be taken to the churches and mosques in a bid to enlighten the people on how to secure themselves and others.

Lieutenant Commander Godwin Egbunu, who represented the Nigerian Navy, said securing the community is a serious task, urging parents not to neglect their duties to their children.

“Neighbourhood Corps should be alert and know the goings in their environment. We should be able to render assistance to one another. There should be cooperation among the citizens,” he said.

Brigadier-General Muhammed Lawal Abubakar, representing the Nigerian Army warned that no one should be made to be above the law, saying “that is why we are having the challenges we have in this country.

“We must not follow one way no matter who we are. Soldiers are discipline, military personnel are disciplined, and no one is above the law. Lagos State has been the pioneered in this idea of community policing over the years,” he said.

According to him, Nigeria, with a population of over 200 million cannot be policed by less than 1.5 million security personnel, including FRSC, immigration and others.

He said Neighbourhood Corps are closer to the people and should police the grassroots effectively.

The guest speaker, Dr. Audu Alqali called for collaboration and synergy among Neighbourhood officers, other security agencies and the people in order to effectively police the state.