Nigerians must resist attempt to cause confusion, hatred through religion - Sanwo-Olu 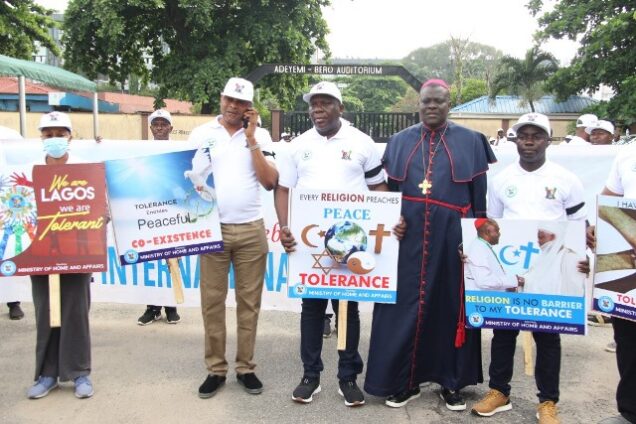 Lagos State Governor, Babajide Sanwo-Olu on Wednesday charged Nigerians to resist any attempt to cause confusion, promote hatred and intolerance through religion.

He said these vices are antithetical to the teachings of all religions and therefore counter productive.

The governor spoke at the 2022 International Day for Tolerance with the theme: ‘The Role of Religion in Democratic Governance in Nigeria,’ held in Ikeja, Lagos.

Sanwo-Olu, who was represented by the Secretary to the State Government, Mrs. Folasade Jaji, said ordinarily, the issue of religion in governance should not give any cause for concern given the fact that the major religions teaches positive virtues such as love, honesty, integrity, transparency, accountability, decency and respect, among others.

“These virtues, if properly imbibed, will no doubt, impact positively on governance which will translate to improved welfare of the people.

“It must however become a cause for concern when religion becomes a tool in the hand, of unscrupulous people to fan the embers of disunity   and chaos in our society to achieve selfish end.

“We have a duty to resist any attempt to cause confusion, promote hatred and intolerance because these are antithetical to the teachings, of all religions and therefore counter productive,” he said.

The governor stated that his government would continue to remain impartial  and protect citizens’ right to practice any religion of their desire and would also remain committed to the promise to create equal opportunities for all citizens without discrimination on the basis of religion, ethnicity, tribe, gender or socio-economic status.

Sanwo-Olu also urged all Lagosians to sustain the spirit of tolerance, understanding and accommodation which Lagos is well known for, especially as “we prepare for another general election in 2023.”

The First Lady of Lagos, Dr Ibijoke Sanwo-Olu, in her speech, said that the political landscape is becoming toxic with hate speeches, imploring stakeholders in the democratic process to respect opposing views.

Ibijoke, who was represented by Mrs. Morenikeji Fashola, urged leaders not only preach tolerance but also be tolerant, saying that “as a result of the heightened political campaigns in line with the mood of the nation as we prepare for the general elections next year, the Nigerian political landscape has been sharply polarized along political inclinations and this, to me, is not out of place since the hallmark of democracy is the freedom of choice and speech.
“However, it has also been sadly observed that the political landscape is becoming toxic with hate speech, fake news, and outright disinformation being employed. This has resulted in name-calling, mudslinging, and all sorts of dangerous tactics and antics.
“For me, even as we call on political leaders to be tolerant of views that are considered to be at variance with their beliefs and socio-political leanings, all stakeholders must learn to respect such opposing views. To this end, religious leaders have an important role to play to deploy the pulpit in our churches and the Minbar in our mosques to deliver sermons that lay emphasis on peace, love, and tolerance,” she stated.
According to the First Lady, intolerance could trigger crises of monumental proportion; hate speech, fake news and that disinformation could activate violence and war.
“The truth is that no meaningful development can occur in an atmosphere devoid of peace and harmonious relationship among the diverse groups that make up the society,” she stated.

Commissioner for Home Affairs, Prince Anofiu Elegushi, said that it was important to spread awareness about the importance of tolerance in the society, especially when various beliefs and faith admonishes tolerance to one another.

“Our religious institutions have a great role to play in educating and enlightening the populace with regards to their civil responsibilities and obligations to national survival,” he said.
Former Vice Chancellor, Ajayi Crowther University, Prof. Dapo Asaju, stated that Nigerians are suffering today and that they must chose leaders on the basis of quality and not allow religious sentiment to determine their choice.
He maintained that Nigerians must by all means avoid religious and ethnic wars because it would not do the country and its citizens any good leading to more suffering, saying that religious leaders are watch dogs who must help political leaders to govern aright by calling them to order when they go astray as well as give quality advice.
The Chief Imam of Lagos State University Teaching Hospital (LASUTH), Dr Saheed Ahmad, warned religious leaders not to see vision or predict that a candidate would win in the coming election because it has the tendency to breed violence, especially if the candidate loses.
Tags:   Babajide Sanwo-Olu   Dr Ibijoke Sanwo-Olu   religious leaders