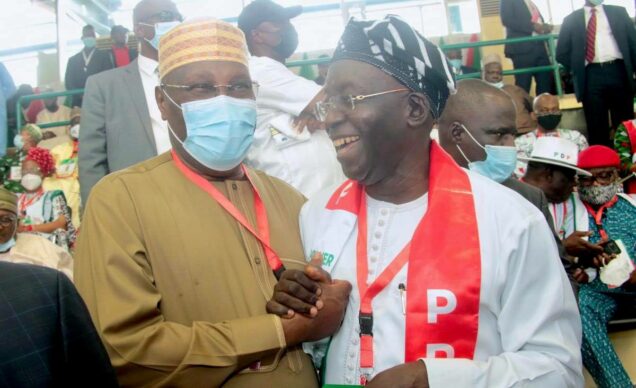 Alhaji Atiku Abubakar, the presidential candidate of Peoples Democratic Party, PDP, has described the national chairman of the party, Iyorchia Ayu as a fron tline advocate of democracy who he had known for many years.

The former Vice President spoke on Friday evening at a dinner organized to celebrate the 75th birthday of Ayu in Abuja.

Five governors of PDP led by Nyesom Wike of Rivers have been demanding that Ayu should vacate office following the emergence of the presidential candidate of the party.

They argued that Ayu, who is from the Northern part of the country like Atiku should vacate office for a Southerner in line with the zoning policy of the party.

But Atiku has refused to commit to the demand that Ayu should vacate office despite the refusal of the five aggrieved governors to be part of his campaign for the presidency because of the issue.

But speaking at the birthday celebration, Atiku further gave indication that he will not back the calls for removal of Ayu, noting that his friendship with the PDP Chairman has been ‘elevated to brotherhood over the years,” after they met during the struggle to foster democracy in the country.

“That was in the Social Democratic Party (SDP) formed by the military. Afterwards, we soldiered on to ensure that the democracy we enthroned continues. It has been many years since we started. We have changed parties at the state and national level. But our enthronement of democracy has been a remarkable achievement in the annals of the country,” Atiku emphasized.

Prompted by a confident prediction by the erstwhile Governor of old Anambra state, octogenarian Chief Jim Nwobodo that the PDP will win the 2023 elections, Atiku said the party under Ayu’s leadership and himself as the president will do the the needful to engender prosperity in the country.

“Dr Ayu and I are poised to return this country to another democratic dispensation: a democracy that brought prosperity to the country between 1999-2007. This is another opportunity for us to lead Nigeria into unity and prosperity; and transform Africa into a better continent by providing veritable leadership,” Atiku said.

He promised that himself and the party apparatus would work conscientiously to improve the well being of Nigerians as it did under ex-President Olusegun Obasanjo between 1999-2007.

Chairman of the occasion, Chief Nwobodo, who described the life of Ayu as one of achievements, commitments and resilience, anticipated electoral triumph for the PDP in 2023.

“I’m absolutely sure we will win this election. If we don’t, it would be our fault as Nigerians have had a bad experience under this (APC) government. They’re yearning for a change,” said Nwobodo.

He added that he wants to see Atiku and his running mate, Governor Ifeanyi Okowa, at the helm of affairs next year, thus urging all party members to mobilize support for the PDP’s victory from ward level to the national level.

The former Governor, who was among the founding fathers of the PDP pleaded with all aggrieved members of the party to bury their hatchet, observing that as a politician Ayu had seen some challenges, but he is a hard working person who never gives up, traits which he said assures that the “PDP is in good and reliable hand.”

Delivering his testimonials of Ayu as a monarch, the supreme traditional ruler of the Tiv, Tor Tiv, Prof. Joseph Ayatse felicitated with and encouraged the celebrant to live by his good deeds.

He said Ayu “have lived an illustrious life. He was a university don, a minister, Senate President and still counting. The entire Tiv nation rejoices and felicitates with you.”

“This is only the beginning for you. You have been very successful. You will be more productive and successful,” he added while praying for his long life and prosperity.

The celebrant’s school mate at the Ahmad Bello University, where he studied Sociology, Alhaji Yayale Ahmed, former Secretary to Government of the Federation said he will always like to associate with him.

“We were in the same faculty in the university. He was a radical who read Sociology. He distinguished himself back then as he was noticeable, making us to to think ‘this Tiv man will be a great man.’

Ahmed noted that Ayu and his friends wanted to contribute to national development, so upon graduation his love for politics made him join it. “He was leader who saw beyond his community,” Ahmed further reminisced about Ayu’s university days.

Mrs Josephine Ayu, Sen. Ayu’s wife for 25 years showered accolades on him, saying he is kind, generous, a ‘mythical phoenix’, good husband and a loving father.

His eldest daughter also had similar praises for her father. On behalf of her five sisters, she said her father’s greatest pride are his children.

Also at the occasion was former Senate Presidents: Bukola Saraki and Adolphus Wabara, now the acting Chairman of the PDP Board of Trustees (BoT), his predecessor, Sen. Walid Jubril and members of the party’s National Working Committee (NWC); who were joined by one of Ayu’s predecessors, Okwesilieze Nwodo as well as the wife of late Chief Solomon Lar, himself a former chairman of the party: Prof. Mary Lar.