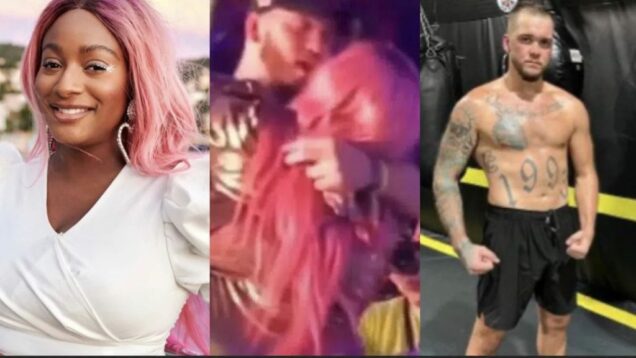 Opinions about Anthony Joshua and DJ Cuppy’s relationship dominated the Twitter discourse on Sunday after reports emerged that the daughter of billionaire, Femi Otedola, is now engaged to Ryan Taylor, a UK boxer.

On Sunday, a video surfaced of Cuppy getting a ring from Taylor in what is believed to be a marriage proposal.

The duo shared a kiss in the midst of a crowd and in the background of ‘Marry You’, a song by Bruno Mars.

This development left fans in awe.

Given their public appearances, many had assumed Joshua and Cuppy would end up together.

Some of the conversations on Twitter were also centered on Cuppy’s connection with sportsmen.

Cuppy is also believed to have dated Victor Anichebe, the footballer.

Facts of DJ Cuppy’s purported engagement are still unverified as neither of the two has publicly spoken of it.

However, Cuppy’s fans have taken to Twitter to express surprise, with some others making congratulatory remarks.

“DJ Cuppy finally engaged to Taylor, a British boxer. Cuppy once dated Victor Anichebe and a very close pal, Anthony Josua. [She] has a thing for sports personalities. Congrats to her,” one of the Twitter users wrote.

In another comment, another Twitter user noted: “DJ Cuppy surprised a lot of people. She acted single for a long time. The only closest person I thought was dating her is Anthony Joshua. I wish her well after her engagement.”