U.S. coach on Infantino's speech: 'He has right to his opinions, we have right to ours' 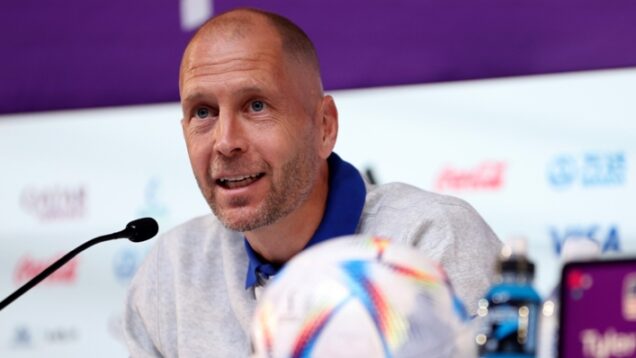 United States coach Gregg Berhalter stressed his team are not in Qatar to focus on off-field matters, though he indicated he does not agree with the views of FIFA president Gianni Infantino.

The Qatar World Cup has been surrounded by controversy, and an hour-long monologue from Infantino at a press conference on Saturday caused further contention.

Infantino used the media gathering to accuse the Western world of hypocrisy, insisting engagement rather than ridicule was needed in order to promote change in Qatar, which has a dubious human rights record.

Amnesty International subsequently criticised Infantino’s comments, which also drew an incredulous reaction from sections of the media in Doha and around the world.

Berhalter backed Infantino’s right to express his views, but ahead of his side’s opening match against Wales, suggested they are not shared by the USA’s squad.

“He’s the president of FIFA and expresses his opinions as he sees fit,” Berhalter said in a press conference on Sunday.

Wales are among several teams who will defy FIFA during the tournament.

Infantino insisted on Saturday that he had assurances “everyone was welcome”, but Gareth Bale will wear a OneLove armband in support of diversity and inclusion, with homosexuality illegal in Qatar.

Asked if the USA would be looking to highlight the issues surrounding the tournament and the host nation, Berhalter replied: “For us, very similar to our efforts State-side, we have this mantra of ‘be the change’.

“It’s starting with the individual, and understanding every individual has a right or an obligation to promote change on their own level. That’s something we’ve focused on as a group, a federation and as a team.

“I think the campaign has been successful. We started educating the players about 18 months ago about what’s going on in Qatar – from my perspective there’s been some positive things and there’s still also some work to do.

“This World Cup can help bring awareness to some of that, and that’s why I think we’re right in line with trying to bring attention to some of the issues here.”

Named captain for the tournament, Leeds United midfielder Tyler Adams shared his experience of meeting some of the migrant workers who had contributed to the building of the stadiums in Qatar.

“It was all people who had an interest in football. They were so passionate about the stadiums, they all had a favourite, so to have a conversation with them, which games they were looking forward to, was really interesting and intriguing.”