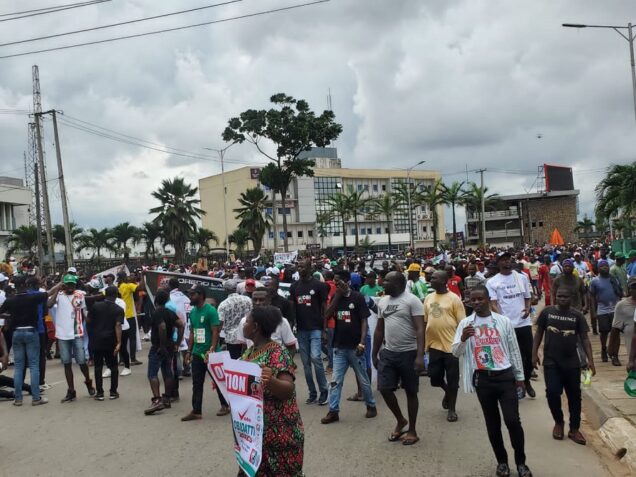 The National Chairman of Labour Party (LP), Barrister Julius Abure has described the presidential campaign rally of the party as the talk of town, despite the State Government’s refusal to provide access to public space for the rally.

He stated this on Saturday in Benin, at a dinner organised in his hornour by the state chairman of the party, Comrade Kelly Ogbaloi.

Addressing the wards and units chairmen, secretaries and support group coordinators of the party who graced the dinner, Abure urged obedient supporters nationwide to translate their huge support for the party’s presidential candidate, Peter Obi, to votes in the upcoming 2023 general elections.

This is even as he expressed gratitude to all Peter Obi supporters who turned out enmass for the Labour Party rally last week without payment of any sort.

He alleged that Edo state government ensured they blocked the use of Ogbe Stadium, UNIBEN Sports arena, UBTH ground and others places, but was unable to block the Baptist Convention ground which was eventually used by the party to flag out its presidential rally in the State.

He described the State Governor’s action as undemocratic, after benefiting from a system that allowed the people to support him in the last governorship election.

Abure noted that with the national movement led by Peter Obi, it is glaring that era of impunity, greedy and selfish politicians who know about themselves alone is gradually coming to an end, and a new era of transparent and participatory leadership is coming to stay.

He however called on the people to double their efforts and ensure that come February 2023, Edo state will deliver 100 percent to Peter Obi.

Earlier, the State chairman of party, Comrade Kelly Ogbaloi, noted that Labour Party supporters are the only people who willingly come out to show their support without receiving anything or being mobilized by any party leader.

According to him, this is a testament to the fact that Nigerians have rejected the APC and the PDP due to the suffering in the land.