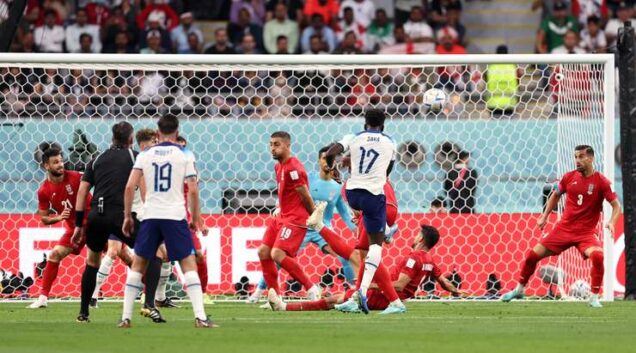 The English side had to wait for 35 minutes to open scoring.

Jude Bellingham ran onto a clever lofted pass from Luke Shaw and easily beat the keeper with a header into the top right corner from close range.

Eight minutes later, Bukayo Saka made a run to receive the ball and produced a powerful shot from mid-range which deflected in off the inside of the right post, beating the surprised goalkeeper for England’s second goal.

England made it 3-0 on first half added time. Harry Kane played the ball into the box, and Raheem Sterling got on the end of the cross to put it inside the right post.

Saka got his brace on 62nd minute as he brilliantly slalomed his way forward past a few defenders and unleashed a shot from the edge of the box, which was deflected and went into the back of the net for England’s fourth goal.

Iran pulled one back three minutes later. Mehdi Taremi picked up the ball after finding some space inside the box, then fired it in off the crossbar.

Marcus Rashford, who came in as a substitute made it 5-1 on 71st minute. He made a great solo run and pulled the trigger from inside the box, beating Hossein Hosseini with a strike into the bottom left corner.

Callum Wilson fed Jack Grealish inside the box, who was unmarked and buried the ball in the bottom right corner for England’s sixth goal.

Iran pulled one back on added time from the penalty spot.

Mehdi Taremi ran up to the ball, stopped and waited for Jordan Pickford to commit before slotting the penalty into the bottom right corner.