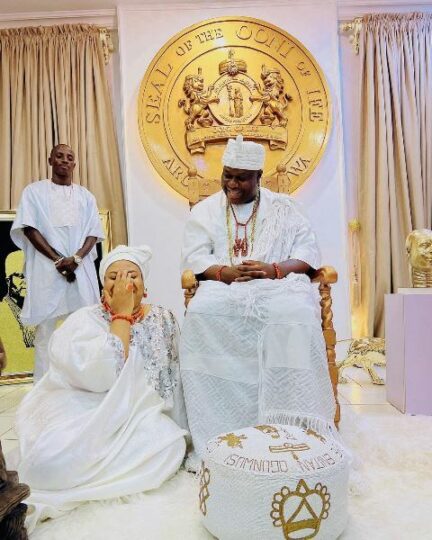 Tongues have begun to wag as Nollywood actress, Nkechi Blessing visited the Ooni of Ife, Oba Enitan Adeyeye Ogunwusi in his palace.

The actress posted a photo of her visit to the Ooni on his Instagram page late Monday and this has set tongues wagging that the Ooni might be up to something.

The way the Ooni and Blessing were laughing in the picture fuelled speculations that the Oba may want to add her to his retinues of wives (oloris).

Blessing had written after posting the photo: “Ever met a jovial king? Well this picture says it all🤭🤭 I have never laughed this hard in a long time…Thank you soo much for the warm reception his Imperial Majesty Ooni Enitan Adeyeye Ogunwusi ojaja (11) @ooniadimulaife God bless your existence Kabiesi 🙏🏻🙏🏻”

She later posted a video on why she was at the Ooni’s palace, saying: “It was an honor to be invited to the palace by her Royal Majesty Olori Aderonke Ademiluyi Ogunwusi as one of the judges for @qmainternational 👏🏻👏🏻 indeed we be doing so much good in the eyes of strangers😊

“I do not take this opportunity and privilege for granted ma🙏🏻 When I got that call, I tot the king was going to put me in prison🤣🤣 but one mind told me NBS Go on that trip you might be wrong, now it doesn’t matter what name you call me, Olosho, ashawo, dirty, razz, uncouth. In fact I have been called diff names on this app, but I did nothing but focus! Cus really those who say you do too much, will D*E to have your space, once you slow down they will take your place without flinching✌️

Reacting to the visit, a Twitter user, Joe_Debor wrote: “She always wants Ooni attention, I think we should all allow her to sell her market, Ooni might buy. Am thinking something, if any one thought same, abi she want Buga her Ex boyfriend Prince or she just all want2 be royalty.”

Ikpe Nyong added: “Nkechi Blessing wants to be his eighth wife, she applied online to be added to Ooni’s wives. I don’t really know why Ooni is marrying many wives, but if his ancestors have given him the strength to satisfy all of them sexually then he should marry more. Because if where him I will.”

A Twitter user, Universal asked in pidgin: “She done meet any king for her village before?”

Okiemute added: “We know why she has decided to visit the Oba, na to seduce the man for marriage. But Ooni is a wise man he knows the game. Blessing after all your na eight position you dey seek for, I thought you say you can buy any man you want as if you be Dangote or Otedola.”

Emmanuel Babalola said: “Blessing was actually there for auditioning of Moremi Ajasoro and had her time with the king.”