Denmark, Tunisia in a drab stalemate 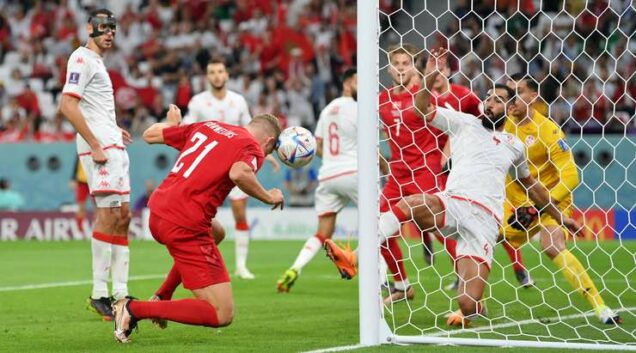 European side, Denmark and African side, Tunisia played out a goalless draw on Tuesday in the first match in Group D at the FIFA World Cup in Qatar.

Neither side could break the deadlock even with eight minutes added time.

The first meaningful action in the first half was on 42nd minute when Denmark appealed for a penalty after Pierre-Emile Hojbjerg went down under a challenge from the defender, but the referee did not cave in to pressure to award a penalty.

A minute later, Issam Jebali had time and space inside the box after picking up a neat pass, but his shot towards the middle of the goal was easily saved by Kasper Schmeichel.

On 69th minute, Aymen Dahmen made a brilliant save. Christian Eriksen easily wove through the defence and fired the ball from mid-range. His effort went towards the right side of the goal but is saved by the keeper.

Andreas Cornelius’ powerful header on 71st minute hit the post. That same minute, Joakim Maehle appeared to handle the ball in the box, but the referee turned down the penalty appeals and waved play on.

On added time, there was a break in play and referee Cesar Arturo Ramos must got a signal and he indicated he would check that earlier penalty claim by Denmark using VAR. After checking VAR he waved play on.