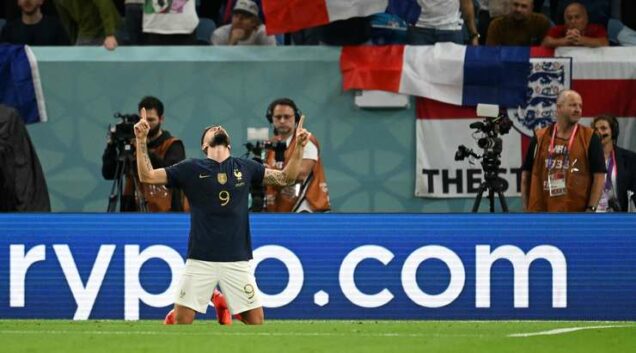 Olivier Giroud grabbed a brace as defending champions, France crush Australia 4-1 on Tuesday in their first match of the tournament.

The French side, which are one of the favourites of the World Cup in Qatar had to come  from behind after Australia stunned them on 9th minute.

Craig Goodwin found himself some space inside the box to get on the end of a pass from Mathew Leckie, then sent the ball into the roof of the net.

The goal awakened the French team, as they mounted the pressure. They equalised on 27th minute.

Theo Hernandez sent a long raking pass onto the head of Adrien Rabiot, who made no mistake from close in and sent the ball into the middle of the goal.

Five minutes later, Olivier Giroud made it 2-1 for France, latching on to a precise pass deep inside the box from Adrien Rabiot, and he beat the goalkeeper with a low shot into the middle of the goal.

France were 3-1 up on 68th minute. Ousmane Dembele sent a superb cross into the box.

Kylian Mbappe latched on to it and from close range planted a header in off the bottom of the left post, leaving Mathew Ryan beaten.

France completed the rout on 71st minute, with Giroud’s brace and his 51st international goal for France.

Mbappe showcased his great technique and produced a beautiful lofted cross into the box. Giroud met the cross and got himself onto the scoresheet with a header into the bottom right corner.