Nkechi Blessing under fire for visiting Ooni of Ife 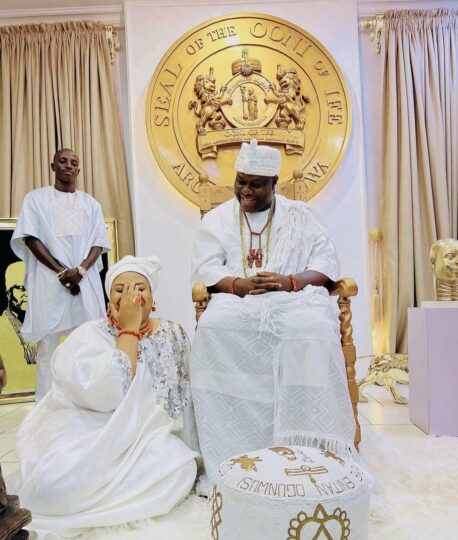 Nollywood actress Nkechi Blessing was heavily criticized after she visited Ooni of Ife, Oba Adeyeye Enitan Ogunwunsi, in his palace at Ile-Ife, Osun State, on Monday.

The actress visited the palace weeks after she expressed interest in becoming one of the wives of the monarch.

With a picture of her and the monarch during the visit, Nkechi described Ooni as a jovial king.

“ever met a jovial king? Well this picture says it all. I have never laughed this hard in a long time. Thank you so much for the warm reception his Imperial Majesty Ooni of Ife, Oba Enitan Adeyeye Ogunwusi Ojaja II. God bless your existence,” Nkechi noted on Instagram.

Reactions to Nkechi’s visit to Ooni

Uche Maduagwu said: “This is now Obsession Aunty, don’t know if Na Mess or Blushing, this picture is confusing, but the minimum qualification for OLORI Na BSc and Maturity, when you finish taking photos, please sweep and return to Lagos.”

Ruonysfashion said: “If the Mohamed won’t go to the mountain, the mountain will go to Mohamed…NBS don dey prepare to be olori.”

Another commentator wrote: “Do everything for clout.”