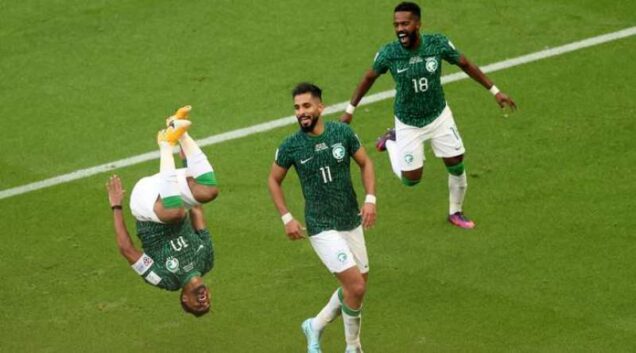 Saudi Arabia on Tuesday declared a public holiday to celebrate its team shock victory over football heavyweight, Argentina at the ongoing World Cup in Qatar.

The Saudi team shocked Argentina 2-1 on Tuesday in the first match of Group C.

The star-studded Argentina, with Lionel Messi capitulated in by far the biggest shock in World Cup history.

Saudi King Salman announced that all public and private employees would get a holiday tomorrow, while schools would also remained closed.

The move comes in the middle of final exams in the Gulf nation, indicating that they will have to be rescheduled, NDTV reports.

Turki al-Sheikh, an adviser at the Royal Court and head of Saudi Arabia’s General Entertainment Authority, announced on Twitter that admission fees would be waived at major theme parks and entertainment centres in the city on Tuesday.

It comes as Lionel Messi’s quest to win the one major title to elude him got off to a shocking start and brought back memories of Cameroon’s 1-0 win over an Argentina team led by Diego Maradona in the opening game of the 1990 World Cup.

Goals by Saleh Alshehri and Salem Aldawsari in a five-minute span in the second half gave the Saudis their greatest win. Messi rolled in a penalty to give Argentina a 10th-minute lead.