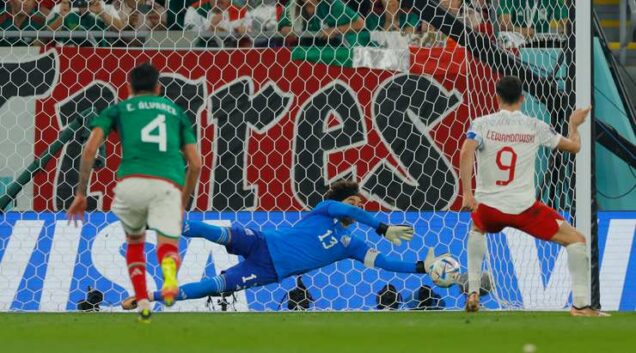 Robert Lewandowski became a villain on Tuesday after he threw away a crucial penalty that would have handed Poland victory over Mexico in Group C.

Argentina had earlier lost 1-2 to Saudi Arabia in the first match of the group.

A win for Poland would have taken off the pressure, but Lewandowski threw away the penalty and the game ended in a barren draw.

Poland were handed a life-line on 58th minute from the penalty spot and Lewandowski, the highest goal scorer in Europe last season and his country’s hero stepped forward to take the kick.

He did not take advantage of the chance to score from the penalty spot. He shot to the bottom right corner, but Guillermo Ochoa leapt out to thwart his effort.

Earlier on 23rd minute, Mexico had a chance to open scoring. Hector Herrera swung the ball into the box, and Alexis Vega got in front of his man and powered his header just wide off the right post.
Mexico nearly broke the deadlock on 64th minute, but Wojciech Szczesny had a great save. Henry Martin jumped high to meet a cross and glanced a promising header from close range, but the goalkeeper pulled off a brilliant stop to keep it out.
Tags:   mexico   Poland   Robert Lewandowski