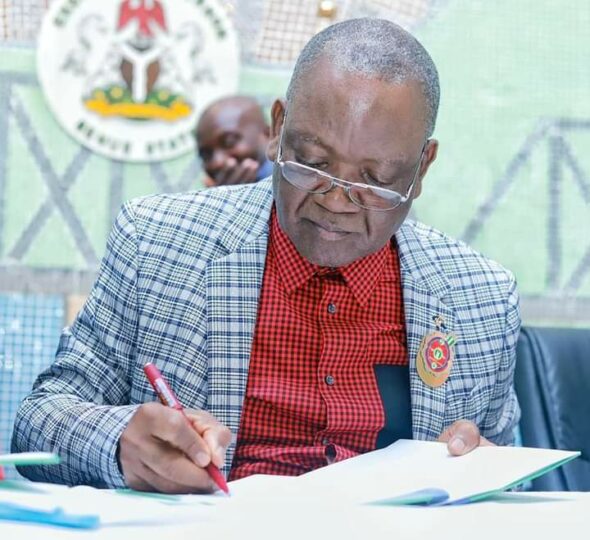 Gov. Samuel Ortom of Benue has called on the Independent National Electoral Commission (INEC) to make adequate provisions for the over two million Internally Displaced Persons (IDPs) in the state ahead of 2023 general elections.

He made the call at a roundtable discussion, tagged; “Contemporary Security Challenges and their Effects on 2023 General Elections”, organised by the Platinum Post Newspaper on Tuesday in Abuja.

The governor, represented by Prof. Magdalene Dura, his Special Adviser, said INEC should create polling units at IDPs’ camps and also engage its members as ad-hoc staff during elections.

This, he said, would ensure credibility of the elections at such centres while giving them a sense of belonging.

He also stressed the need for the Federal Government to ensure more security at the country’s borders, saying that the porous nature at the various borders had led to the infiltration of criminal elements into the country.

The Benue Governor alleged that Permanent Voters Cards (PVCs) are already in wrong hands ahead of the 2023 general elections, saying there is the need for INEC to raise its game.

“There is need for government and INEC to ensure credibility of the electoral process,” he said.

He also expressed concern over the fate of over two million IDPs in his state whom, he said, had been rendered homeless as a result of insurgency.

He appealed to the Federal Government to come to the assistance of IDPs in Benue as it is doing to other IDPs in other parts of the country.

“There is lack of equity and justice in Nigeria. INEC needs to have comprehensive data on the IDPs so that they can create polling units for IDPs,” he said.

He added that since the possibility of IDPs returning to their homes to vote before the elections is slim, INEC must open discussions with them to know what they need.

Gov. Abdullahi Ganduje of Kano State, who chaired the occasion, stressed the need to ensure the safety and security of voters, election personnel, materials, candidates, party agents, observers and media practitioners during the electioneering process.

Represented by his Chief of Staff, Alhaji Usman Mohammed, Gov. Ganduje called on the electorate to eschew acts of violence and other negative tendencies that could mar the conduct of 2023 general elections.

“The importance of the topic in relation to the nation’s current security situation in the face of an election cannot be over emphasised.

“And more so, my state, Kano, is among states in the federation, and particularly in the North that have had one security challenge or the other, which we have, with the will of God Almighty, been able to surmount.

“Kano is now one of the most peaceful states in the federation. Insecurity is one of the biggest challenges facing the conduct of the 2023 general elections.

“Ensuring the safety and security of voters, election personnel, materials, candidates, party agents, observers, the media and transporters among others is paramount,” Ganduje stressed.

He added that the responsibility had become more challenging in the context of the current asymmetric security situation in the country.

Ganduje said with few months to 2023 general elections, there was no better time for proactive measures than now to ensure that the country was secured enough for elections to be held across the nooks and crannies.

“However, despite the severity of the security challenges facing 2023 polls, I believe that the relevant security agencies have the potency to ensure that the process is made peaceful and secured by synergising effectively.

He advised that security agencies should, however, review their operational strategies and optimally deploy all operational assets towards addressing current and evolving general security threats ahead of the elections.

Mr Edwin Olofu, Managing Director and Chief Executive Officer, Platinum Post, in his opening remarks, said the theme of the roundtable: “Contemporary Security Challenges And Their Effects On The 2023 General Elections”, is not only timely but very important.

This, he said, was considering the fact that there was a relationship between security and the peaceful conduct of the forthcoming general elections.

“Going by the campaigns and debates on issues relating to the governance of the country by candidates of the leading political parties.

“There is no doubt that the election is potentially going to be the most keenly contested in Nigeria’s political history.

“As members of the fourth estate of the realm, it is incumbent on us to mobilise the citizenry to prove the naysayers who are already instilling fears in the minds of the electorate that the election could be marred due to the spate of violent crimes in parts of the country,” he said.

He explained that the objective of the roundtable was to find answers to some nagging questions posed by the current security situation in the country.

Olofu said the roundtable was also to mobilise the electorate to exercise their franchise without fear or hindrance.

Commissioner of Police, Mr Kene Onwuemelie, who represented the Inspector General of Police (IGP) at the event, assured that the forthcoming general elections would hold in all parts of the country without rancor.

“All arrangements have been put in place to ensure violent-free elections. We are using this opportunity to warn trouble makers to have a change of mind, as the hands of the law will not spare them,” he said.

He added that the police would work with other security agencies to ensure the protection of lives and property before, during and after the elections.

The roundtable highlighted the need for government to sensitise the public on the power of voting, and the need to eschew violent conduct, before, during, and after the polls through effective media campaigns.

The event was attended by representatives of the Comptroller General of the Nigeria Security and Civil Defense Corps (NSCDC), Nigeria Union of Journalists (NUJ), Civil Society Organisations and the International Republican Institute (IRI) among others. (NAN)