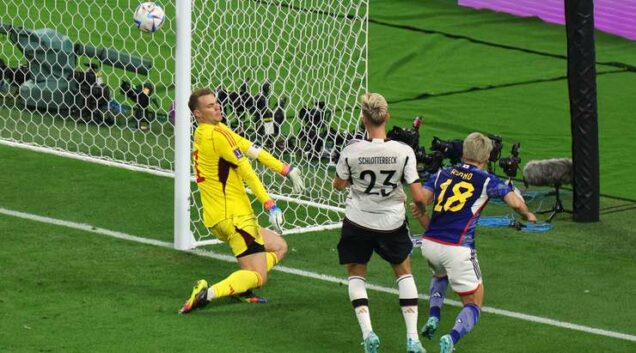 Japan came from behind to beat Germany 2-1 on Wednesday in another World Cup shocker in Japan.

Germany took the lead from the penalty spot on 33rd minute.

Ilkay Gundogan put the ball into the middle of the goal past the outstretched arm of Shuichi Gonda to give Germany 1-0 lead.

Germany had another goal disallowed on first half time added time.

Serge Gnabry played a lovely pass into the box and found Kai Havertz. He tried his luck from close range and coolly struck the ball into the back of the net.

On 60th minute,  Ilkay Gundogan drifted into the box to give his teammate support. He received a fantastic pass and shot from close range, but it crashed against the right post.

Japan equalised on 71st minute. Ritsu Doan was quickest to react to the rebound and stabbed the ball into the back of the net.

The Asian side did the unthinkable on 83rd minute, slotting home their second goal to stun the former World Champions.

Ko Itakura slipped the ball through to Takuma Asano, and he darted into the box to unleash a magnificent shot into the top of the net.