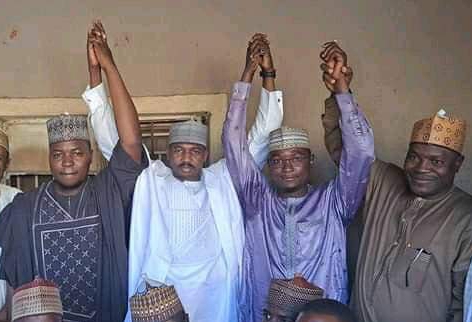 Some of the defectors

Leaders of the Peoples Democratic Party’s (PDP) primary support group in Sokoto state have joined the All Progressives Congress (APC) ahead of the 2023 general elections.

The leaders of the “Ubandoma/Sagir Youth Mobilisation and Awareness Support Group,” according to Abubakar, were welcomed into the APC fold by Alhaji Ahmad Aliyu, the party’s governorship candidate.

He said, “Those received by APC are Lukman Kwaire and Anas Muhammad, the group’s chairman and secretary, respectively.”

Abubakar said, “The defectors had been working for the PDP in many fields but found no political ideology and focus within the party, which made them cease their support and join the APC.”

”The new members dumped the PDP following an intervention by one of the APC stakeholders in the state, Alhaji Umaru Tambuwal.”

Given the number of people joining the APC on a daily basis, Abubakar expressed confidence that the party would win the election.