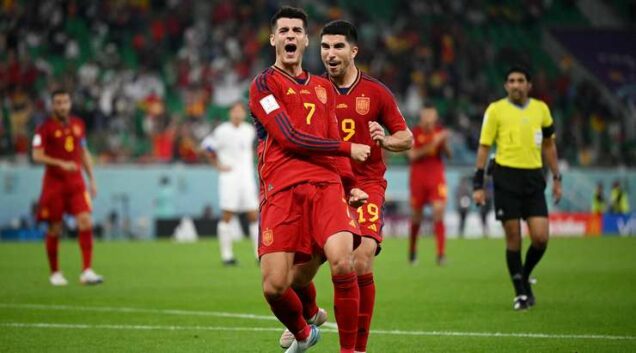 Ruthless Spain inflicted the biggest pain on Costa Rica on Wednesday, demolishing the North American side 7-0 in Group E match at the ongoing World Cup in Qatar.

There was no room for upset like in the game between Germany and Japan where the minor emerged shocking winner.

Spain moved to business from the blast of the whistle with an 11th minute goal from Dani Olmo.

Olmo collected a pass and from inside the box he lifted the ball over Keylor Navas, who was off his line.

Spain made it 2-0 on 21st minute. Jordi Alba played the ball to Marco Asensio, who found himself unmarked inside the box and slotted a first-time shot past Navas into the bottom right corner.

It was 3-0 for the European side as Ferran Torres converted a penalty, He ran up to the ball, stopped and waited for Navas to commit before slotting the penalty into the bottom left corner.

Torres grabbed his second of the match on 54th minute. He pounced on a loose ball inside the box and beat the goalkeeper with a shot into the bottom left corner.

Gavi scored a sensational goal to make it 5-0 as he volleyed the ball from inside the box onto the bottom of the right post and into the net after he was assisted by Alvaro Morata.

Carlos Soler fired in a rebound inside the right post after the ball broke to him in the box to make it 6-0.

Morata then scored the 7th goal from a stunning strike. He latched on to a precise through ball from Dani Olmo before unleashing an unstoppable shot into the back of the net from the edge of the area.