Wike praises self over 'achievements' in Rivers judiciary sector 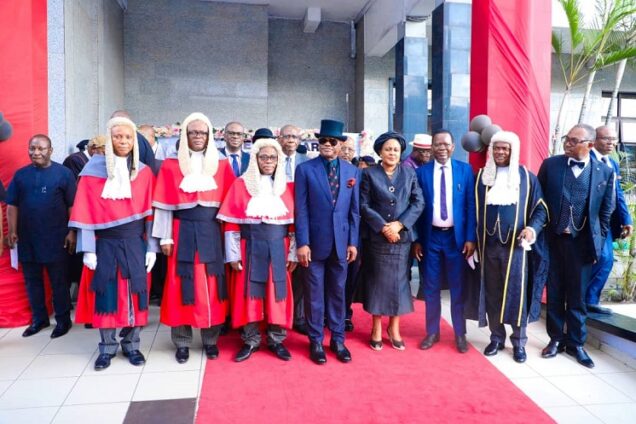 Governor Nyesom Wike on Thursday recounted the various interventions of his administration in the Rivers State judiciary sector with conclusion that that the impressive achievements of his government was beyond the imaginations of many.

Wike made the assertion in his remarks at the 2022/23 Legal Year opening ceremony held at the Rivers State judiciary complex, Port Harcourt on Wednesday.

He said in the last seven and half years his administration has diligently supported the judiciary to discharge its constitutional mandate.

Wike also boasted that all the promises his administration made to the people concerning the judiciary have been fulfilled with impressive achievements beyond the imaginations of many.

The governor noted that as the third arm of government, the judiciary plays a critical role in advancing the rule of law, justice and good governance.  But on assumption of office in 2015, his administration met a judiciary in Rivers State that was at a crossroads.

“The State High Court had no Chief Judge, leadership, or direction for nearly two years.  The governor then attempted to impose a Chief Judge on the State outside the due process. When this devious attempt was resisted, he instigated a phantom crisis and closed down the States courts until he left office.

“We knew that the ensuing social and economic anarchy would ruin Rivers State without functional courts to uphold and defend the rule of law.  Beyond the crisis, we also inherited a judiciary neglected to the hilt, dilapidated and inadequate courthouses and unpaid salary arrears.

“Our first task was to revive the judiciary and ensure the speedy administration of justice. Without wasting time, we appointed the first female Chief Judge for the State, reopened the courts and restored judicial services from our first day in office.”

He explained that his administration began rehabilitating the existing courthouses and built new ones for the State High Court. And within the first year in office, provided a new Special Utility Vehicle to judges as official cars, which have since been replaced since 2019.

Governor Wike said prior to his administration, judges in the State were faced with the challenge of lack of a retirement home. According to him, the government considered it morally wrong for the State to evict judges from their official quarters and force them to rented apartments after they retired from service.

“We, therefore, enacted the Judicial Officers Housing Scheme Law and took over the responsibility of providing life-long residences for Rivers State judges, including those serving in federal jurisdictions.

“We have since implemented this law by providing 4-bedroom duplexes with appurtenances, including security and regular electricity at the Chinwe Aguma judicial estate, to our judges.

“Similarly, those who opted not to reside in the estate were given an equivalent monetary value to build or buy similar houses.”

He said the State government has also completed the Justice Mary Odili Judicial Institute, to complement the National Judicial Institute to provide relevant training and capacity building for Rivers State judges and magistrates to enhance their competence for effective service delivery.

The governor maintained that his administration has also been releasing the capital and recurrent budget of the Judiciary from 2015 to date. According to him, three weeks ago, the State government released over 80% of the 2022 judiciary’s capital votes to the State’s Chief Judge.

Moved by the need to expand access to the Nigerian Law School and reduce the admission backlog, the governor said the State government requested and secured the approval of the Federal Government to build a new campus in Port Harcourt.

“We recently delivered the Nabo Graham-Douglas Campus of the Nigerian Law School to the Council of Legal Education to fulfil this promise. With a carrying capacity of over 1500 boarding students, this campus ranks as the best law school campus in Nigeria and will remain so for a long time.”

Governor Wike said he remains confident that his successor will sustain a more robust relationship with the judiciary in the State.

The Chief Judge of Rivers State, Hon. Justice Simeon Amadi, commended governor Wike for his immense support for the judiciary in the State.

Justice Amadi urged lawyers in the State to avail themselves of the benefits of the Multi-door court established to ensure greater access to mediated disputes settlements, especially for the business and investment community.

He explained that the State judiciary generated over N1.2 billion in the current legal year.

On his part, the Rivers State Attorney General and Commissioner for Justice, Prof. Zacchaeus Adangor, SAN, described as sacrilegious unguarded verbal attacks against judges by lawyers.

Adangor said unguarded verbal attacks drain the confidence of judges and called on lawyers to desist from castigating them.

Speaking on behalf of Body of Senior Advocates of Nigeria, Onueze C.J. Okocha, SAN, observed that the judiciary is still plagued by slow dispensation of justice.

Okocha, who was the former president of the Nigerian Bar Association, suggested that to overcome this challenge, States should be allowed to determine the number of judges and magistrates they need.

The chairman, Nigerian Bar Association, Port Harcourt branch, Victor Benibo, commended governor Wike for his immense contribution to the advancement of legal profession in the State and the country.