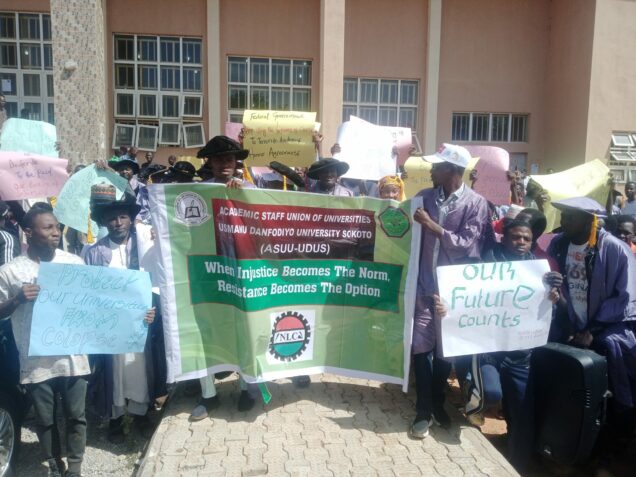 ASUU members carrying placards during their protest on the campus of the Usmanu Danfodio University, Sokoto (UDUS) on Thursday

The Usmanu Danfodio University, Sokoto (UDUS) chapter of ASUU staged a protest on Thursday over the withheld salaries of its members.

The protest was held within the university’s main campus and ended at the office of the vice-chancellor, Prof. Lawal Bilbis.

The letter was for onward transmission to President Muhammadu Buhari.

The protesters carried placards with inscriptions such as: “Respect the principle of collective bargaining”; “we say no to casualisation of intellectual labour” and “ASUU is a protector of public institutions”, among others.

Lectures, with the themes: “FG attempts to criminalise strikes in the labour sector’’ and “Casualisation of academic staff’’, were delivered before the protest took off.

The students chanting different songs demanded immediate payment of the withheld salaries of the lecturers, stressing the dangers of teaching on empty stomach.

Prof. Mustapha said the union convened a special congress and the rally to discuss the issue as well as to attract attention.

He said the protest was to express displeasure at the decision of the government to pay October salary on a pro-rata basis.

“We don’t know why government took such decision, but to our knowledge, such a decision violates the rules of engagement for academics,” he said.

The ASUU chapter leader appealed to parents, students and other well-meaning Nigerians to call on Mr President to urgently resolve the dispute between the union and the Federal Government.

Receiving the letter, Prof. Magawata commended the union leaders for their orderliness and assured them that the letter would get to its destination.

He urged lecturers and students to continue to be law-abiding.