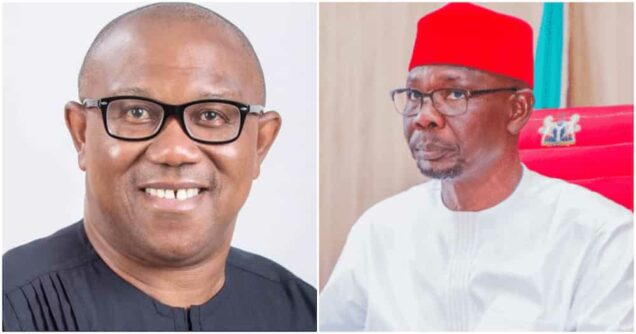 Governor of Nasarawa State, Abdullahi Sule, said Peter Obi, has been devalued to less than 10 kobo.

Sule, who spoke on Wednesday during a live interview on Channels Television’s Politics Today, argued that the criticisms of Obi, a former governor of Anambra State, by the incumbent Governor Charles Soludo has devalued the Labour Party’s presidential candidate.

The governor also rubbished the polls for the 2023 elections that put Obi ahead of All Progressives Congress (APC) Bola Tinubu and the Peoples Democratic Party’s (PDP) Atiku Abubakar.

Asked to mention the traits that make Tinubu stand out from his opponents, Sule said, “Today, the current governor of Anambra State where Peter Obi was governor is the right person who will tell what has happened during the period of Peter Obi.

“Today, I’m in a better position to tell you what Tanko Al-Makura did compared to what we see on the pages of newspapers because I have the files and numbers in front of me.

“So, if you go to Anambra, look at what the governor of Anambra (is saying). They were in the same party. It’s not that they changed parties. It’s Peter Obi that changed parties but it’s the same All Progressives Grand Alliance (APGA).

“So, if you go and see what he is saying today about Peter Obi, you will not buy Peter Obi for 10 kobo.