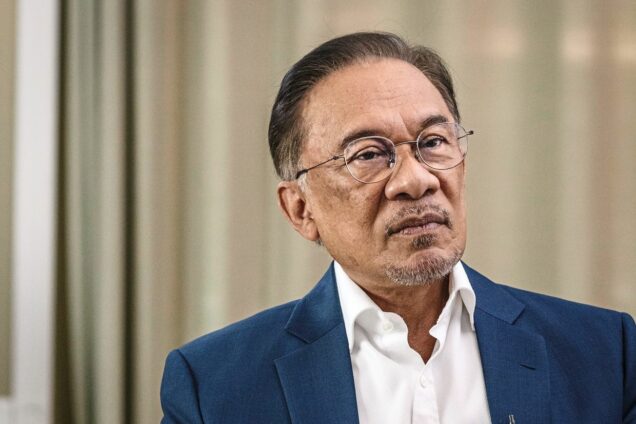 Anwar’s appointment caps a three-decade-long political journey from a protege of veteran leader Mahathir Mohamad to protest leader, to a prisoner convicted of sodomy, to opposition leader and, finally, prime minister.

The former finance minister and deputy prime minister will have to address soaring inflation and slowing growth while calming ethnic tension that has flared since a Saturday election.

Here are some reactions to his appointment:

“Anwar is appointed at a critical juncture in Malaysian history, where politics is most fractured, recovering from a depressed economy and a bitter COVID memory that killed thousands. Always regarded as the man who could unite all warring factions, it is fitting that Anwar emerged during a divisive time. In the end, the palace felt that Anwar was the best candidate to lead a government consisting of coalitions who had opposed each other for years.

“While Anwar and his party will likely act on their vision of treating every Malaysian, regardless of race, equitably, they will also have to assuage religious factions that this government will not threaten the position of Malays and Islam in the country.

“Much challenge lies ahead for Anwar, but for the first time in modern Malaysian history, Anwar has all the help he needs to make it a success. A man who was jailed for almost a decade, who came close to the premiership more than half a dozen of times, have finally fulfilled his lifelong ambition.”

“With the appointment of Anwar as the 10th prime minister, this is a closure to the longest-running political crisis in Malaysia that began 24 years ago when he was sacked by the prime minister Mahathir Mohamad …. So it’s an important closure, Anwar has been the longest-serving potential prime minister candidate.

“I think this is the new normal in Malaysia politics, no more dominant coalition or no more dominant political party that controls the House of Representatives. Every government will have to be very consultative, they’ll have to consult the members of parliament in policymaking.”

“The new government might want to consider some kind of agreement signed with one of the parties or coalitions in opposition to ensure that certain policy matters don’t get stalled in government and to ensure the smooth passing of laws.

“Where there is an absence of such an agreement … the opposition leader must play that role very responsibly. The opposition should not attempt to destabilise the government by having continuous negotiations or concession buying from existing members of government, so that it can contribute to the environment of stability.”

“While we know for certain that Anwar will be the 10th prime minister and lead a coalition of Pakatan Harapan and Barisan Nasional, it terms of what it means for policy or cabinet appointments, we need to wait for more clarity.

“What investors will be looking for is who will become finance minister, whether there will be any changes to the budget tables by the previous government or any inkling that Pakatan Harapan would introduce a GST.”