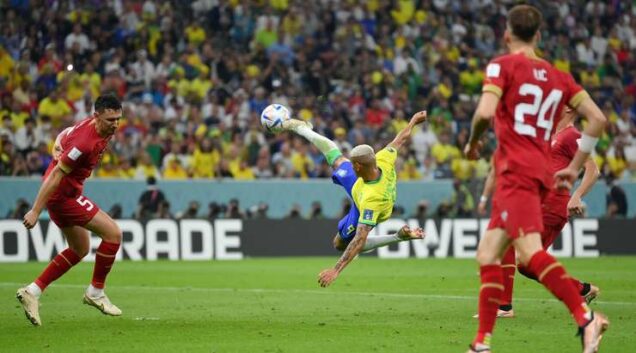 Richarlison scores a brace, one of which was a stunning volley, as Brazil beat Serbia 2-0 on Thursday night to move top of Group G.

Brazil mounted the pressure on Serbia from the blast of the whistle, but they were held by the resilient defenders of Serbia.

The second half came with the Brazilians more determined, missing several scoring chances.

Vinicius Junior fired in a promising shot which ricocheted off the goalkeeper back to Richarlison inside the box and he sent the ball into the back of the net.

He scored his brace and a wonder goal for Brazil on 73rd minute.

Richarlison’s crowning moment came 11 minutes later after the first goal, at first mis-controlling a pass from Vinicius but readjusting brilliantly to take the aerial route and fire home an acrobatic right-foot finish.

On 81st minute, Casemiro ran towards the goal to give his teammate support. He received a fantastic pass and shot from the edge of the box, but it crashed against the crossbar.

Two minutes later, Fred produced a ferocious strike from the edge of the box. His dangerous effort towards the left post was blocked by Vanja Milinkovic-Savic, who pulled off a superb save to keep the ball out of the net.
On 87th minute, Rodrygo received a precise pass on the edge of the box and has an effort on goal. Unfortunately for him, his strike flew inches high over the bar.
Tags:   Brazil   Richarlison   Serbia