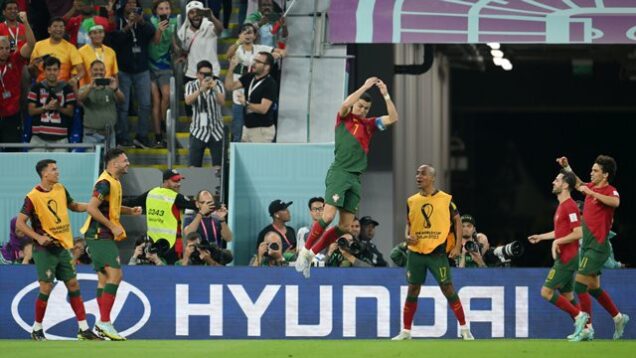 Portugal beat Ghana 3-2 on Thursday to go top of Group H in the ongoing World Cup in Qatar.

Ghana is the first African side to score a goal at the ongoing World Cup.

After a goalless first half, Cristiano Ronaldo put Portugal ahead from the penalty spot.

Ronaldo struck the ball into the left of the net, giving goalkeeper Lawrence Ati-Zigi no chance.

Andre Ayew drew Ghana level on 73rd minute after receiving a delightful pass inside the box before slotting the ball past the goalkeeper.

Six minutes later Joao Felix was released by Bruno Fernandes, he surged into the box and smashed a great shot into the top corner after a one-on-one with the goalkeeper to make it 2-1 for Portugal.

Bruno Fernandes produced a good pass and picked out Rafael Leao inside the box on 80th minute. He quickly took a shot which went into the bottom right corner and left the goalkeeper helpless for to give Portugal 3-1 lead.

Osman Bukari, on 89th minute leapt to connect with a delightful cross and placed a header inside the right post. The goalkeeper had no chance to make a save.

He then celebrated his goal the Ronaldo way.